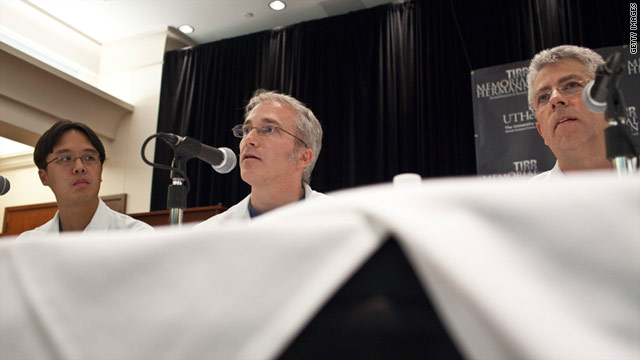 Doctors at the Houston, Texas, hospital where U.S. Rep. Gabrielle Giffords was transferred said that while she remains in intensive care, she has surprised them with the progress she has already made.

Giffords, 40, who was shot in the head at a public event in Arizona on January 8, was transferred Friday to Memorial Hermann-Texas Medical Center. It was thought the congresswoman would begin rehabilitation at The Institute for Rehabilitation and Research (TIRR) Memorial Hermann, but officials said that she was taken instead to the hospital's trauma center for evaluation and treatment.

"She's not quite ready for rehabilitation yet," Dr. Dong Kim of Memorial Hermann told reporters Friday. Kim would not elaborate, but another doctor, John Holcomb, said later in the day that Giffords has fluid on her brain.