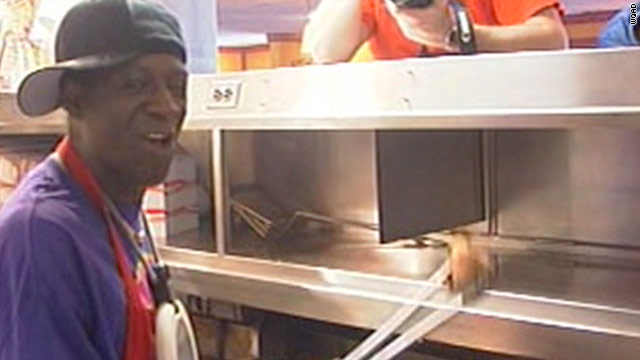 Look out, Colonel Sanders. Flavor Flav has a fried chicken restaurant, and he's coming for you - starting in a small Iowa city.

The Public Enemy rapper and reality TV star opened Flav's Fried Chicken in Clinton, Iowa, on Monday with a business partner he met through a connection in Las Vegas, the Clinton Herald reported.

"My chicken ain't no joke. I ain't scared to go up against the Colonel, tastewise," Flav said, referring to chicken giant KFC, in a YouTube video of him frying chicken at Monday's opening.

The sight of Flav cooking at his own restaurant apparently won't be a one-time thing. He told the newspaper he intends to work at the Clinton location now and then to help draw customers. (Good news for the fledgling operation: If his trademark attire is any indication, he should have no trouble arriving to work on time.)

It was Cimino's brother, Clinton restaurateur Nick Cimino, who suggested he and Flav open a fried chicken restaurant in the Iowa city of roughly 26,000 people.

Nick Cimino bought a building next to his own restaurant and got it ready for Monday’s opening, the Clinton Herald reported last week.

Flav, a 51-year-old New York native, told the newspaper he's developed his own special fried chicken recipe over the years, having grown up in a family that owned a diner and having attended cooking school in the late 1970s.

His chicken has "that deep down southern fried chicken" taste, and also has "some crisp going on up in there," he said.

"The taste … will blow up your taste buds, man," Flav told the Clinton Herald in an interview posted on YouTube.

Flav, who starred in the VH1 reality series "The Surreal Life" and "Flavor of Love," said he'll consider opening more FFCs after getting this one under way.

See the dramatic moments when lightning strikes a boat in Florida with people aboard: cnn.com/videos/us/2022…
CNNweather

12:08 pm ET June 30, 2022 RETWEET
The Supreme Court curbs the federal government’s ability to fight climate change. The decision is one of the most ctwitter.com/i/web/status/1…HSv6
CNNweather

See the dramatic moments when lightning strikes a boat in Florida with people aboard: cnn.com/videos/us/2022…
CNNweather

12:08 pm ET June 30, 2022 RETWEET
The Supreme Court curbs the federal government’s ability to fight climate change. The decision is one of the most ctwitter.com/i/web/status/1…HSv6
CNNweather