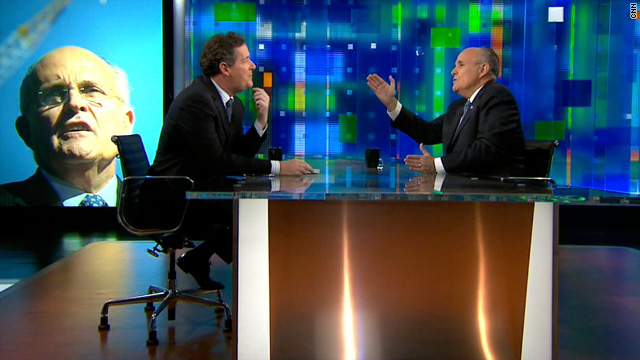 Giuliani to Piers Morgan: Tea Party’s good, but a couple people in it are 'a little crazy'

Rudy Giuliani, the former New York mayor and 2008 Republican presidential candidate, talked Tea Party, taxes and the best (and worst) day of his life in a lively interview with CNN's Piers Morgan that airs at 9 ET Monday night.

Overall, the Tea Party is a "good" movement, Giuliani said, but it has also attracted "a couple of people that are a little crazy ... "

When he first launched his bid for the White House several years ago, he recalled that "there was a big anti-war movement in this country against the Iraq War, people hanging President Bush in effigy, people saying President Bush should be killed."

"Well, those people weren't the core of that movement," he said.

"The core of that movement legitimately opposed the war in Iraq. I didn't agree with them, but they had every right to do it. They were very emotional. They're very angry. But they were respectable people who opposed it, with some extremists who made them look bad. The Tea Party, the same thing - respectable people. They have a legitimate political point. A couple of people that are a little crazy who take it to an extreme."

Will the Tea Party help or hurt the GOP's odds of taking the White House in 2012?

" ... If they keep us on a strict focus on economic issues, they'll help us a lot. If they take us off on other issues, then you just - you just don't know, they could hurt us," Giuliani said.

Morgan also asked if the ex-mayor would raise taxes if he were president. Giuliani said he would not. He answered that he would rather cut expenses, and he compared what he did in his time as mayor to what he would do in the Oval Office.

"When I became mayor of New York City, I had a $2.4 billion deficit and everybody wanted me to raise taxes. I said if I raise taxes, I'll drive people out of New York City and then I'll be raising taxes again. So what I did was I cut expenses by 15 percent. I cut everything but the police department, because I had too much crime. I cut schools. It was very unpopular. I mean, I cut every single thing - things that I thought were good and things that I thought were bad." He said federal spending must be cut "to the level of realistic federal revenues."

"I don't think I ever saw more heroism, more, just, tremendous outpouring of love, people to people," he said. "And when I say 'day,' I mean period of time. You know, you showed a picture of Hillary Clinton and me there. You know, people couldn't imagine. I imagine that Hillary Clinton - and particularly at that point - and me could work together," he said. "And we worked together very, very, very closely."

For a moment in time, Giuliani said, "there were no Republicans, no Democrats, just - just trying to help people. ... In a way, it was the worst and the best - and the best day, largely because of the way the people - the people reacted."

In a lighter moment after the interview with Morgan, the New Yorker predicted how the Yankees will do in 2011.

Some video highlights from the interview: