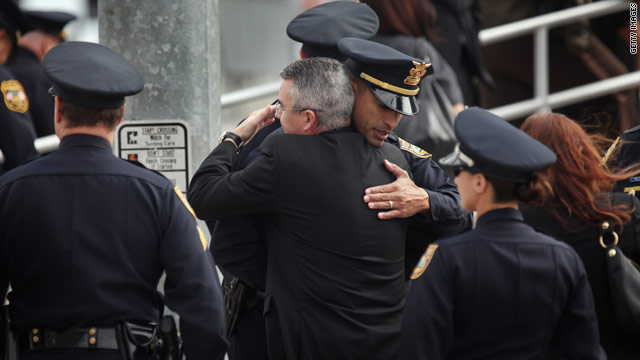 “It is a very disturbing trend for all of us,” said Hal Johnson, general counsel for the Florida Police Benevolent Association. “Florida has never seen a streak like this. I don’t think anybody has.”

It is natural to search for answers, Johnson said, even if there aren’t any. The shootings do not appear to be related, and the motives may never be known. Declaring it to be open season against police officers seems dangerously simplistic, he added.

“They are shooting at people they know have guns,” Johnson said. “I don’t know what’s going on out there, but I’ve never seen it like this. I do see the developing of a callousness. It’s almost as if shooting a police officer has lost its shock effect.”

- On Sunday, four officers were shot in a Detroit police station by a man who walked in, firing randomly. Lamar Deshea Moore was shot to death by police so his motive may never be known, but local reports say a relative was awaiting sentencing for double murder. Two of the police officers remain hospitalized. For more, read CNN’s update and affiliate reports from the scene: WXYZ-TV and WDIV-TV.

- Two deputies were shot outside a Walmart in Port Orchard, Washington, near Seattle, on Sunday. Check out CNN,  KIRO-TV and KOMO-TV for the latest updates.

- A police officer is in a coma and in critical condition after being shot during a traffic stop early Sunday in Indianapolis. Check out WTHR-TV and WISH-TV for updates.