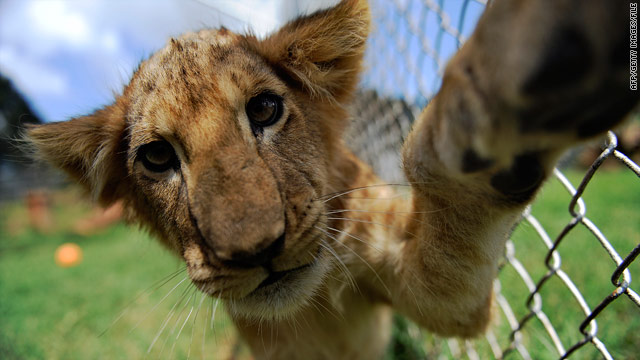 Sorry, I couldn't resist ... So, last week, we brought you the tale of a Tucson, Arizona, restaurant and bar that wanted to include lion on its exotic taco night next month.

Boca Tacos y Tequila had served delicacies such as elk, turtle, kangaroo and python in the past, so this didn't seem like such a dramatic departure from its past offerings on Exotic Taco Wednesdays (CNN affiliate KVOA points out Boca has also made Rocky Mountain oyster tacos, which, interestingly, were served without controversy).

We even tossed some props to owner Bryan Mazon, who was perhaps too honest in explaining his motivation: "I'm doing the African lion to get my name out," he told the Arizona Daily Star.

At the time, Boca's Facebook page was playing host to an array of comments running the gamut from violently appalled to enthusiastically curious.

Well, after many a mighty roar from the former category, Mazon has announced that you will not find the king of the jungle on one of his tortillas.

"Due to concern for safety of our families, customers, vendors, and friends we will not be selling African Lion Tacos on Feb. 16th, 2011. We will continue to bring unique and creative menu items, but not at the expense of safety," he said on his Facebook page, adding that patrons who had placed pre-orders could call his restaurant for refunds.

Several posts on the page expressed disappointment that some critics of the tacos resorted to threats to get their way. Others continued to question why the line is drawn with lion and not, say, kangaroo. Some simply conveyed their thanks to Mazon, while a few people could not dispense with the vitriol.

Wrote poster Louise Mcdonald: "seriously, what did you expect? for people to sit back and let you do it? If threats are what it took, oh well, at least you have enough sense to not want your family harmed. Guess you arent totally selfish. your supporters are just as mentally challenged as you."

Mazon can't catch a break. At least he got some publicity.