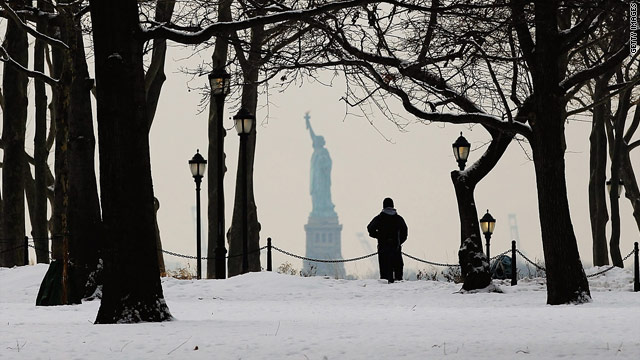 Forecasts show a strong snowstorm may hit major metropolitan areas in the eastern United States on Wednesday night into Thursday morning, and snow and mixed precipitation also could complicate travel in parts of the South.

Winter storm watches are in effect for southern New England (including the Boston area), all of the New York city area, and the Philadelphia and Washington areas.

In the New York City area, 4 to 8 inches of snow will be possible Wednesday night into Thursday morning, with isolated amounts of 10 inches or more in some locations, ﻿﻿CNN Meteorologist Sean Morris said.

The Boston area may get up to a foot of snow Wednesday night into Thursday morning, though snowfall may be light over Cape Cod, Massachusetts, and nearby islands, Morris said.

Wednesday morning's commute in the Philadelphia area could be treacherous due to the possibility of freezing rain coating streets, bridges and overpasses. The greatest accumulations are expected along the I-95 corridor, Morris said.

Snow accumulations of 5 or more inches are possible in the Washington area Wednesday night into Thursday morning. However, the main threat could be freezing rain overnight, causing treacherous driving conditions.

The storm may cause long delays and flight cancellations at airports in northeastern and Washington airports, Morris said.

Morris said the system is a nor'easter, which gets its name from the continuously strong northeasterly winds blowing in from the ocean ahead of the storm and over the coastal areas.

Snow is expected to start earlier in the South. In northeastern Mississippi and northwestern Alabama, rain could change to snowfall by Tuesday night, and snow could continue into Wednesday morning, according to the National Weather Service. Accumulations of 1 to 4 inches are possible in those areas, the weather service said.

Rain also is expected to change to snow in Tennessee late Tuesday or early Wednesday, with snow accumulations of about 2 to 4 inches, the weather service said.