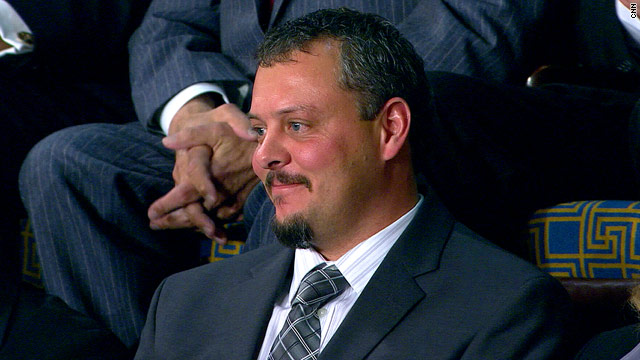 Brandon Fisher has tried to avoid the publicity that comes with playing a key role in two of the last decade's biggest mine rescues.

But when the President of the United States wants to mention you in his State of the Union speech, and the first lady invites you to sit with her, there's really no way to decline.

And so, Fisher donned a suit and tie and showed up with his wife, Julie,Â as guests in Michelle Obama's box during President Barack Obama's second State of the Union address to the nation.

In the eyes of the President, the small business owner from Berlin, Pennsylvania, was not just an honored guest of the evening. He was a symbol of the American dream -Â alongside Vice President Joe Biden, "a working class kid from Scranton" and Speaker of the House John Boehner, "who began by sweeping the floors of his father's Cincinnati bar" - someone of modest means who would go onÂ to "do big things," Obama said.

"We may have different opinions, but we believe in the same promise that says this is a place where you can make it if you try. We may have different backgrounds, but we believe in the same dream that says this is a country where anything's possible. No matter who you are. No matter where you come from. That dream is why I can stand here before you tonight," he said.

"And that dream is the story of a small business owner named Brandon Fisher."

Fisher's business, which specializes in drilling technology,Â is based in the heart of Pennsylvania's mining country. His company, Center Rock Inc., aided in the rescue of nine miners who were trapped for more than four days after the 2002 collapse of the Quecreek Mine. He has drilled oil, gas and water holes and the foundations for the Trump Tower in Chicago, Illinois.

But those assignments paled in comparison to the difficulties of rescuing 33 men in Chile who became trapped August 5 when a copper and gold mine they were working in collapsed around them.

Fisher became involved in the rescue effort when the company that distributes his custom-made drills in Chile put the Chilean government in touch with him. Eventually Fisher's drill bits widened the hole leading to the miners to a size that allowed them to be extracted from underground one at a time in a specially designed cage.

By the time the actual rescue commenced, Fisher was already home in Pennsylvania, working on his next project, Obama said.

"Later, one of his employees said of the rescue, 'We proved that Center Rock is a little company, but we do big things.'

"From the earliest days of our founding, America has been the story of ordinary people who dare to dream. That's how we win the future. We are a nation that says, 'I might not have a lot of money, but I have this great idea for a new company. I might not come from a family of college graduates, but I will be the first to get my degree. I might not know those people in trouble, but I think I can help them, and I need to try. I'm not sure how we'll reach that better place beyond the horizon, but I know we'll get there. I know we will.

Read more about Fisher's role in the Chile mine rescue

McDonald's is partnering with BTS, the massively popular Korean pop band, for its next celebrity meal â€” and this titwitter.com/i/web/status/1â€¦UB6E
cnni

1:01 am ET April 21, 2021 RETWEET
About a dozen of George Floyd's relatives gathered at a hotel a few blocks away from the Hennepin County Courthouseâ€twitter.com/i/web/status/1â€¦Xf
cnni

10:33 pm ET April 20, 2021 RETWEET
Apple unveiled a slew of new products at its annual Spring launch, but waited until after the event to announce bigâ€twitter.com/i/web/status/1â€¦0u
cnni