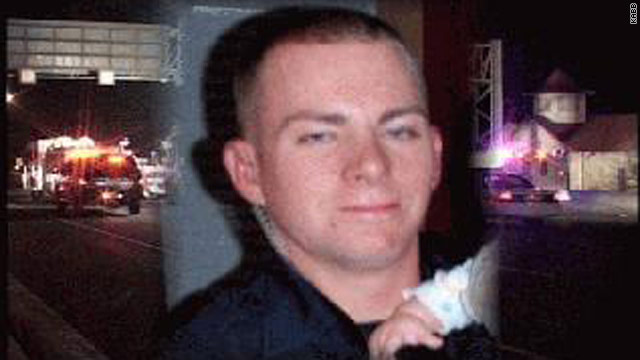 Mike Thornton is one tough hombre.

A friend who visited him said the San Antonio, Texas, police officer was laughing and joking Monday, just two days after his right leg was severed when a pickup truck crashed into his squad car.

Thornton, 27, is calling himself "RoboCop" in anticipation of being fitted with a prosthetic leg, his close friend Ed Eisenbeck, chief of the Camelot Volunteer Fire Department, told CNN affiliate KSAT-TV.

"He's done a lot and he's not done yet," Eisenbeck said of his former assistant chief, who also is a certified paramedic and firefighter, as well as a former Army staff sergeant.

"He's a very strong person, and he wants to get back out there," Thornton's wife, Hallie Thornton, 25, told the San Antonio Express-News newspaper Sunday. "He's cracking jokes and talking about how he's going to be RoboCop."

The 1987 movie reference supplants Thornton's former nickname, "Scorch," which he picked up after severely burning his hands in a roadside bomb attack in Iraq, for which he earned a Purple Heart.

Eisenbeck said when Thornton volunteered for the fire department, he "came here still in bandages from his IED blast."

On Saturday, Thornton had gotten out of his patrol car to help two stranded motorists on an I-35 overpass in San Antonio. A truck driven by a man who allegedly was drunk smashed into the back of the police car.

Thornton ended up dangling over the side of the overpass, clinging to the barrier above a 35-foot drop.

"He tried to throw his right leg over the bridge to get back up, and saw his leg on the other side of the bridge," Eisenbeck told KSAT. The limb was severed below the knee.

The motorists he was helping grabbed him by his belt and pulled him over the barrier, Police Chief William McManus told the Express-News.

At the Brooke Army Medical Center emergency room, before he was taken in for surgery, Thornton was asking when he could return to work, Eisenbeck said.

Immediately after the surgery, Thornton was discouraged, lamenting that his career was over, his wife -┬Āa former Army medic who served with him in Iraq -┬Ātold the Express-News. But she believes he'll come back.

The other┬Ādriver, Kevin Balditt, 24, of San Antonio, was charged with felony intoxication assault on a public servant and passing an emergency vehicle. His bond was set at $160,000, the Express-News reported.

The long evolution of China's official narrative regarding its treatment of Uyghurs is closely tied to Beijing's inŌĆtwitter.com/i/web/status/1ŌĆ”Nm
cnni