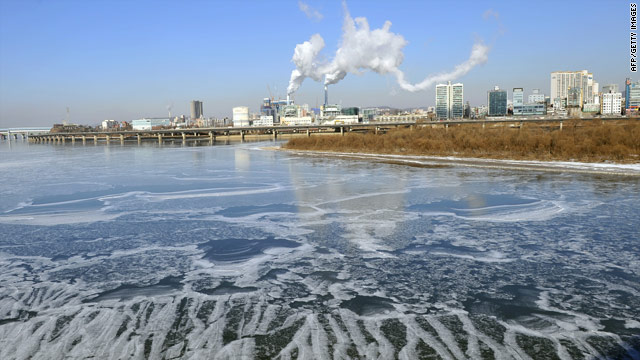 The Han River, which flows through South Korea's capital of Seoul, is frozen over during the cold snap.
January 25th, 2011
10:51 AM ET

Public servants in South Korea are heading to the office in their long johns this week as the nation's government tries to stave off blackouts during a cold snap that has prompted record energy usage.

Public agencies are prohibited from using central heating for two hours during peak periods, and thermostats must be set no higher than 18 degrees Celsius (64.4 degrees Fahrenheit), according to a statement from the South Korean Ministry of Knowledge Economy's Energy Cooperation Division.

"The government has rolled up its sleeves and called for nationwide efforts to conserve energy," the statement said.

While rolling up its sleeves, it's also banning personal heaters and advising employees to put on extra clothing.

"Officials working at (public organizations) are not allowed to use individual heaters during working hours, but instead are advised to wear long johns," the ministry statement said.

Temperatures for Seoul were forecast with highs of only -5 degrees C (22 F) through FridayÂ and lows of -13Â C (8 F) during that time.

The heating restrictionsÂ are level one of the country's energy-saving plans. IfÂ they don't work, level two bans decorative lighting; level three bans the use of elevators below the fifth floor of buildings, limits the use of indoor lighting and allows employees to drive to work only every other day; level four bans all driving to work and mandates early closure of public buildings.