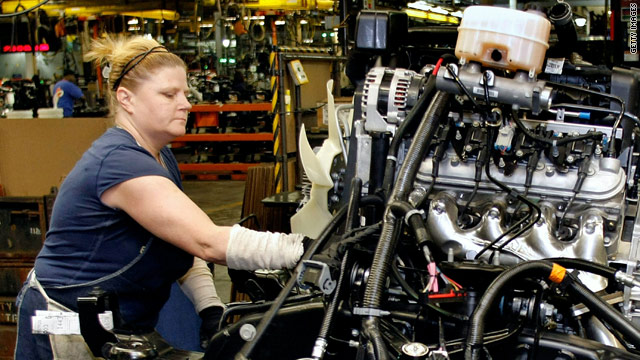 General Motors announced Monday it is adding a shift and 750 jobs at its Flint Assembly Plant in Michigan.
January 25th, 2011
01:21 PM ET

The state of jobs

The nation's economy spent 2010 slowly meandering through a lackluster recovery. It was held back, in part, by continuing high unemployment. While the unemployment rate dropped a little during the year, only a fraction of the number of new jobs needed to make a dent in the figure were created.

People looking for work are finding few new opportunities. "A year ago, it was terrible, and it's not much better today," said Ed Regan of the Taylor Hodson job placement firm in New York. "We've definitely turned a corner, but we're still looking at people who were out of work for two years who were highly employable."

But the nation's job market is showing signs of improvement. Lakshman Achuthan of the Economic Cycle Research Institute said, "We're going to be growing faster. A slowdown that we've had for the last couple of quarters - not a recession, just a slower growth - that is over, and we have a revival of growth in 2011."

President Obama will spend a significant amount of time during this evening's State of the Union address talking about the job market and the need to put people back to work. CNN Radio's Steve Kastenbaum looks at where the nation's labor force is today, compared with one year ago, and where it's heading one year from now.

Click on the icon to hear Kastenbaum's full story: