The White House released the 2020 tax returns for both President Biden and Vice President Harris, restoring a tradiātwitter.com/i/web/status/1ā¦Pd

The NYRA has temporarily suspended trainer Bob Baffert from entering any horses in races at the track that is hostātwitter.com/i/web/status/1ā¦zr

RT @CNNBusiness: The president of the country's largest nurses' union has spoken out against updated federal guidance which says that ā witā¦

Working more than 55 hours a week is killing hundreds of thousands of people a year through stroke and heart diseasātwitter.com/i/web/status/1ā¦Ct

The US announces more sanctions against Myanmar's military government, key figures in the military regime and someātwitter.com/i/web/status/1ā¦dW 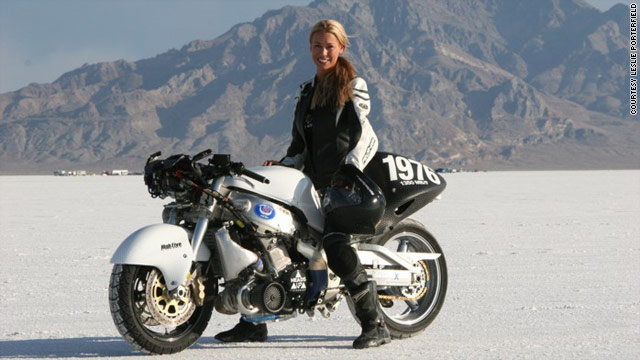 Porterfield holds the Guinness record as the fastest woman in the world on a motorcycle. She drove a motorcycle 232.522 mph on Utah's Bonneville salt flats in 2008.

The Dallas native holds or has held the land speed record in four classes, according to a biography on her website. She'll be appearing at the International Motorcycle Show this weekend in Cleveland.

"To make a good rider," Porterfield told Time magazine during a photo shoot, "It takes somebody who can react to unusual circumstances effectively and stay calm. These bikes are a handful, and they are tough to ride. There is a lack of traction that always comes into effect and sometimes the bike moves around quite a bit and sometimes it can get out from under you pretty fast, so it takes some good calm reactions and a lack of panic when things get a little squirrelly out there on the salt [at Bonneville]."

Some of her records were once held by men. "It's an even playing field," she told Time. "That's one of the things I like about it."

The man who called himself the "father of the B-2 bomber" was sentenced to 32 years in a federal prison on Monday for selling information about the stealth bomber to foreign agents.

In August, the 66-year-old Gowadia, an Indian-born naturalized U.S. citizen, was convicted on 14 counts, including espionage, money laundering and tax evasion, according to a report from the Star-Advertiser newspaper in Honolulu.

Gowadia passed information to China concerning how to develop cruise missiles capable of evading heat-seeking missiles that might be used as a countermeasure, according to the newspaper report. He also passed to the Swiss government and businesses in Israel and Germany information about how to target the B-2, the report said.

Although he faced life in prison, U.S. District Chief Judge Susan Oki Mollway in Honolulu reduced the sentenced to 32 years in part because of the work he had done in developing the B-2, the Star-Advertiser reported.

Actor Michael Rapaport might not look like one of the biggest hip-hop heads on the planet, but he is.

And itās with his love for the musical genre that he tackled his screen directorial debut, āBeats, Rhymes and Life,ā a documentary about the pioneering hip-hop quartet, A Tribe Called Quest.

How pioneering? Well, multiplatinum artist-producer Pharrell Williams, of Neptunes and N.E.R.D. fame, says during the film, āMe, Kanye, we wouldnāt be here if not for Tribe albums.ā

The filmās premiere was received well this weekend at the Sundance Film Festival in Park City, Utah, but it also elicited some controversy when three of the bandās four members did not show, according to the Los Angeles Times.

According to MTV, Q-Tip, the bandās most recognizable voice and face, said in December he was ānot in supportā of the 95-minute documentary. He later elaborated, saying, āThere were just different things that need to be done edit-wise.ā

In a statement prior to the premiere, Q-Tip, Jarobi and Ali Shaheed Muhammad said they could not attend the premiere and thanked their fans for the support theyād received regarding the film.

āWe hope that it is well received,ā the statement said.

In a question-and-answer session following the premiere, the only Tribe member to attend, Phife Dawg, said he wished his colleagues could have been there and that he hopes they attend the showing at the Tribeca Film Festival, the Times said.

Rapaport, who is known more for his acting roles (he got his start at Sundance in 1992 with the film āZebraheadā), said he wanted to chronicle Tribeās ascent to stardom as if it were a rock ānā roll documentary.

āThey are the equivalent to Led Zeppelin, the Beatles and the Rolling Stones. I've been fans of those groups and fans of documentaries about those groups for a long time, and when I approached doing this film, I wanted to treat it in the same way. I didn't want it to be over-produced; I wanted it to have a rawness to it,ā Rapaport told MTV.

US President Biden expressed support for a ceasefire as intensifying violence between Israel and Hamas militants inātwitter.com/i/web/status/1ā¦mU
cnni

6:00 pm ET May 17, 2021 RETWEET
Experts believe the B.1.617 variant is driving the huge wave in infections seen across India in recent weeks. The cātwitter.com/i/web/status/1ā¦Gq
cnni

5:48 pm ET May 17, 2021 RETWEET
Even though hurricane season is still a couple weeks away in the Atlantic Ocean, the National Hurricane Center begaātwitter.com/i/web/status/1ā¦Yl
CNNweather