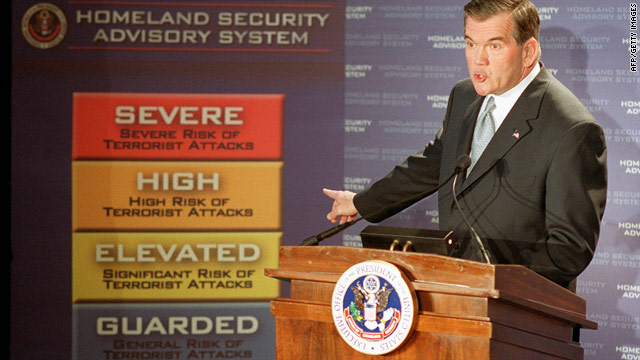 The system was established in 2002 to inform the public of the current risk of terrorist acts through a five-level, color-coded "Threat Condition" indicator. Today's terror threat level for the U.S. government is elevated, or yellow, and for all domestic and international flights, the U.S. threat level is high, or orange, according to DHS.

In its place, DHS will move to a system that focuses on specific threats in geographical areas. It will be called the National Terror Advisory System. DHS Secretary Janet Napolitano will officially make the announcement tomorrow at a "State of America's Homeland Security" speech at George Washington University.

9:00 pm ET October 22, 2021 RETWEET
Asked whether he would entertain the notion of getting rid of the filibuster for voting rights legislation, Presideâ€twitter.com/i/web/status/1â€¦Eq
sarasidnerCNN