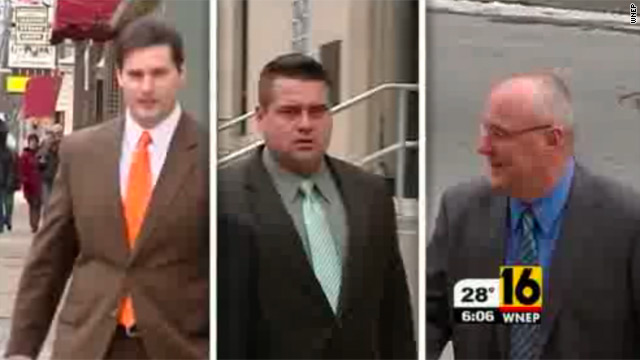 A federal jury has begun deliberating the case of three former Pennsylvania police officers accused of trying to cover up the beating death of an undocumented Mexican immigrant.

A Wilkes-Barre jury began deliberations Wednesday morning in the trial of former Shenandoah Police Chief Matthew Nestor and former officers Jason Hayes and William Moyer. The three men are charged with conspiring to obstruct justice during the investigation into the fatal beating of Luis Ramirez in July 2008. Moyer has also been charged with witness and evidence tampering, and with lying to the FBI.

Ramirez, a day laborer and father of two who was engaged to a woman from Shenandoah, died three days after he was beaten into a coma during a street fight with members of the high school football team. The incident divided the rural mining town along racial lines and became a flash point for racial tensions nationwide.

Federal prosecutors allege that the defendants helped the boys concoct a cover story and intentionally omitted incriminating details about the attack in police reports.

At the time of Ramirez's death, Hayes was dating Piekarsky's mother. Moyer's son was a high school freshman who played football with the boys involved in the attack, an indictment states.

All three men testified in their defense and denied that they tried to hide facts in the investigation, CNN affiliate WNEP reported.