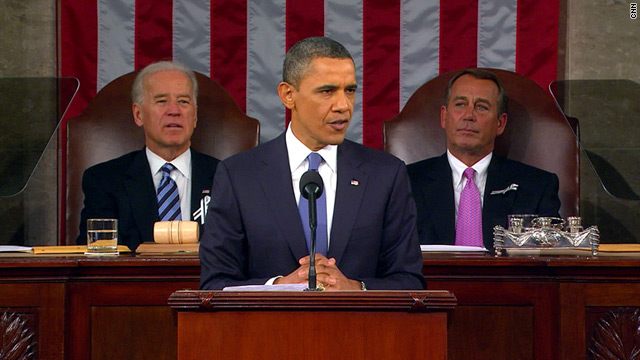 President Barack Obama urges both parties to work together in the national interest in his address Tuesday night.
January 26th, 2011
10:12 AM ET

On the Radar: State of the Union reaction, new Toyota recalls, Giffords' condition

Review of Obama's speech - If you missed President Barack Obama's speech to the nation Tuesday night, here's a full transcript and video. The president touched on many familiar themes, and CNN's iReporters tried to sum up all his points in a single tweet.

How about the "economy"? Obama said it's headed in the right direction but the country's priorities should change, especially when it comes to spending. The president called for increasing investments in key areas such as education and clean energy, but he also wants to make reductions in spending to help get America's deficit under control and proposed a five-year domestic spending freeze.

During another portion of the speech, he highlighted a small-business owner, describing the man's story as a symbol of the American dream. Obama also spoke of U.S.Ā Rep. Gabrielle Giffords, who is recovering from a gunshot wound to the head after a gunman's rampage at a politicalĀ meet-and-greet this monthĀ in Tucson, Arizona.Ā The congresswoman'sĀ name was met with applause.

On Wednesday, the president will take his message on the road, discussing opportunities for job growth in clean energy during a stop in Wisconsin.

The Republican response to the State of the Union speech came from Rep. Paul Ryan of Wisconsin, who blamed the president's policies for America's debt problems. In the first-ever response from the Tea Party, Republican Rep. Michele BachmannĀ of Minnesota called for a repeal of the health care reform law.

More Toyota recalls - More than 1.5 million Toyota vehicles across the globe are being recalled because there may be an issue with fuel leakage, the auto company said Wednesday. One recall involves about 1.2 million units of 16 models - including the Noah and other models - within Japan and 140,000 Avensis and Tourer models overseas because of faulty fuel pipes that could cause fuel leakage, according to the company. A separate recall involves about 245,000 Lexus cars sold in the United States.

News of the recall sent shares of the automaker more than 1% lower in premarket trading. One year ago, Toyota Motor Co. announced it was recalling many of its most popular models and shutting down factories to deal with defects that drivers said were causing cars to accelerate out of control.

Giffords' recovery - The DemocraticĀ lawmaker's condition has been upgraded from serious to good. Giffords was able to watch some of the State of the Union speech from her hospital room. Her family released a photo showing her husband holding her hand and watching television.

Giffords has been in the intensive care unit at the University of Texas Memorial Hermann Hospital in Houston since Friday. Doctors said she needed to be in the ICU because she has a drain removing excess fluid from her brain after being tranferred from an Arizona hospital.

She may head to a nearby rehab facility, the Institute for Rehabilitation and Research Memorial Hermann, on Wednesday.

US President Biden dispatched an unofficial delegation to Taiwan Tuesday in a show of support for the island, accorātwitter.com/i/web/status/1ā¦j6
cnni

8:57 pm ET April 13, 2021 RETWEET
"Humans share with other species the potential to signal danger when screaming, but it seems like only humans screaātwitter.com/i/web/status/1ā¦C3
cnni

8:37 pm ET April 13, 2021 RETWEET
Now to be clear the judge said it was too prejudicial for the jury to hear her testimony about Chauvin.
sarasidnerCNN