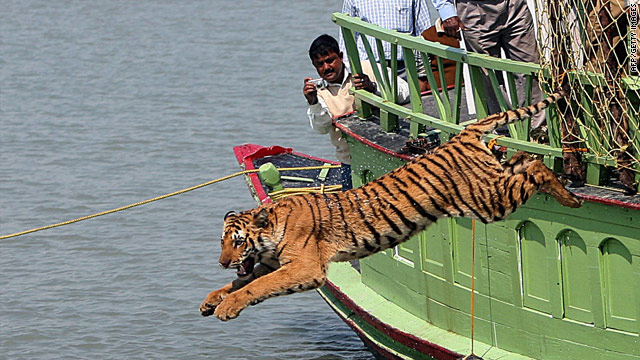 The wild tiger population in Asia could triple to more than 10,000 with thoughtful land management where they live and breed, a new paper from top conservation scientists says.

If governments were to treat the many disconnected tiger reserves throughout Asia as a single "landscape" and provide safe corridors for the animals to roam among them, populations could flourish, the paper argues.

The paper, "A landscape-based conservation strategy to double the wild tiger population," appears in the current issue of the journal Conservation Letters.

"In the midst of a crisis, it's tempting to circle the wagons and only protect a limited number of core protected areas, but we can and should do better," said World Wildlife Fund chief scientist Dr. Eric Dinerstein, a co-author of the study. "We absolutely need to stop the bleeding, the poaching of tigers and their prey in core breeding areas, but we need to go much further and secure larger tiger landscapes before it is too late."

Wild tiger numbers have declined from about 100,000 in the early 1900s to as few as 3,200 today because of the poaching of tigers and their prey, habitat destruction and human/tiger conflict, according to the WWF. Most of the remaining tigers are scattered in small, isolated pockets across their range in 13 Asian countries.

The paper gives several examples of how tiger populations were able to recover from losses because animals were able to migrate from other areas through protected corridors.

It also notes places where tigers were severely diminished and unable to recover because their habitats were isolated from those of other tigers.

The analysis was prompted by November's St. Petersburg Declaration, a pledge among 13 countries in the tiger range to try to double the animals' population. The summit that led to the declaration was sponsored by the World Bank's Global Tiger Initiative.

"Following the St. Petersburg Declaration, Nepal has committed to the goal of doubling wild tiger numbers across our country by 2022," said Deepak Bohara, Nepal's minister for forests and soil conservation, quoted by the WWF. "This analysis shows that it can be done, not just in Nepal, but, if done right with careful study and planning, across the entire tiger range."