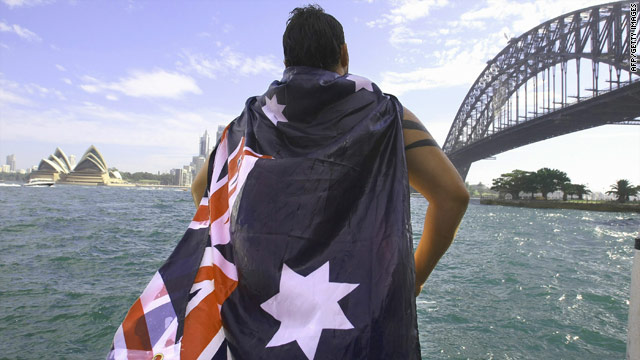 A man drapes himself in Australia's flag on Australia Day at Sydney Harbor on Wednesday.
January 26th, 2011
01:41 PM ET

In a statement released by Ausflag, a nonprofit organization seeking "a truly Australian flag," the dozen recipients of the "Australian of the Year" award say the keeping the Union Jack, flag of former colonial ruler Great Britain, as part of Australia's flag prevents Australia from truly establishing its own national identity.

The Union Jack is seen in the upper left-hand corner of Australia's flag, with a large, seven-pointed white star below and┬Āthe stars of the Southern Cross in the field of blue.

"We must boldly take the next step and define ourselves confidently and distinctly before the world," says the statement.

"We believe the time has come to embrace a flag worthy of our sovereign, independent, mature, egalitarian nation; our own flag," it continues.

Among those signing the statement are tennis great Evonne Goolagong, Olympic swimmers Dawn Fraser and Shane Gould, climate change activist Tim Flannery and environmentalist Ian Kiernan. The 12 called for a national vote on a new flag.

Robert Webster, chairman of Ausflag, said Australia needed a flag "as unique and powerful as the flags of the United States, Canada, New Guinea and South Africa, all of which were once dominated by the Union Jack."

The group released its statement on Australia Day, which commemorates the day in 1788 when the first fleet of 11 British convict ships arrived at Sydney Cove and raised the Union Jack.

Though the date was recognized throughout Australia's history, it has only been consistently observed as a national holiday since 1994, the website australiaday.org.au reports.

The long evolution of China's official narrative regarding its treatment of Uyghurs is closely tied to Beijing's inŌĆtwitter.com/i/web/status/1ŌĆ”Nm
cnni