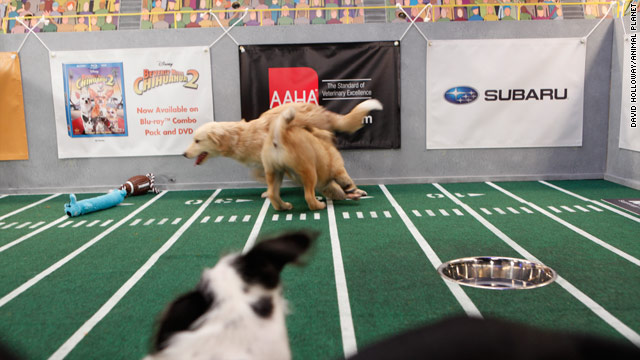 Puppy Bowl VII's lineup ready to ruff it up

Are you ready for the cutest, most adorable faux sporting event of the year?

Animal Planet has announced the lineup for Puppy Bowl VII, the annual Super Bowl antidote pitting irresistible pups against each other and a slew of chew toys on the gridiron.

The┬Āfootball-with-puppies game has aired the same day as its fellow venerated American tradition, the Super Bowl, for the past seven years.

The 20-pup starting lineup was assembled from shelters and rescues across the country and as far as the U.S. Virgin Islands, all of whom will be vying for the title of MVP, or most valuable puppy (surely you knew that).

Among our favorites: a Lab mix named Jack, who has apparently learned to deal cards and pick up some hours at the local casino in the 12 weeks he has been alive, according to his profile; and 16-week old "Little Red," a shih tzu-beagle mix who has a culinary degree.

Check out the complete starting lineup

Ratcheting up the cuteness factor this year is the addition of chicken cheerleaders on the sidelines and "puppy-cam technology" that will enable fans to experience the field from a player's perspective, Animal Planet said.

And, 3-D fans take note: For the first time in Puppy Bowl history, the action will be broadcast in a 3-D version that will premiere on the ŌĆ£3netŌĆØ network, the brainchild of Discovery Communications, Sony and IMAX.

Forget the Black Eyed Peas - the Bissell Kitty Half-Time Show will be back with a kitty-inspired acoustic solo performance that promises to dazzle canine and feline fans alike.

This group of black men comes out to protests in and around Minneapolis. We Push for Peace is here to literally doŌĆtwitter.com/i/web/status/1ŌĆ”dC
sarasidnerCNN

10:22 pm ET April 16, 2021 RETWEET
The long evolution of China's official narrative regarding its treatment of Uyghurs is closely tied to Beijing's inŌĆtwitter.com/i/web/status/1ŌĆ”Nm
cnni