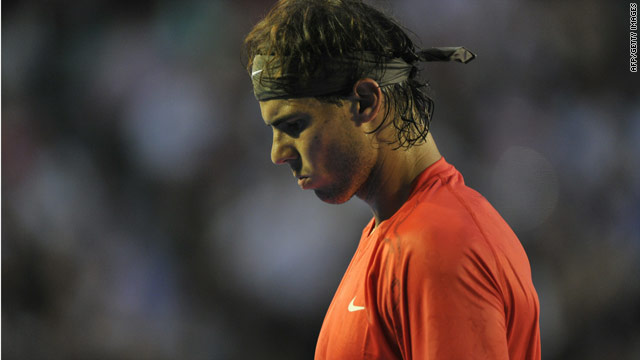 There will be no "Rafa Slam," no showdown with Roger Federer and no happy ending for Rafael Nadal at the Australian Open.

The world's No. 1 tennis player suffered a shocking upset at the Aussie Open quarterfinals on Wednesday, falling 6-4, 6-2, 6-3 to fellow Spaniard David Ferrer. Nadal, who had won three Grand Slam tournaments in a row and was hoping to hold all four majors at once, came up short due to an apparent leg injury, which forced him to call a medical timeout in the third set and visibly hampered him against Ferrer.

"This is a difficult day for me," Nadal said after the match. "Today, I can't do more than what I did. He played at a very high level."

The loss marks the second consecutive year Nadal has lost Down Under because of injury. Last year, he bowed out early against Andy Murray because of a bothersome right knee. This year, it looked like it was his leg, although he declined to elaborate much after the defeat. The injury caused him to come up short on balls he would normally return and seemed to take the magic out of one of the sport's greatest of all time.

SI.com senior writer Jon Wertheim admitted that it was tough watching the world's most dominant tennis player hold back tears mid-match as his body betrayed him.

"Every time he's lost recently, there does seem to be a theme of injury. And to his total credit, he seems sensitive to the issue," Wertheim writes. "He can take the high road, but we can't. If you saw the match, it was clear there was an issue, and I'm sure we'll hear about the MRIs and get the Jay Cutler report in due time. Any casual fan could tell this wasn't the Rafael Nadal of the first four rounds."

After the match, Nadal was very defensive answering questions about his injury, preferring not to go into detail and provide excuses for his loss, writes SI.com's Drew Lawrence.

"The world number one parried questions about his health and successfully held his ground at first. 'I can't tell you which problem I have,' (Nadal) said. 'Because I don’t know.' But, just as in the match, his defense softened, his pain was plain. 'Seems like I always have problems when I lose,' Nadal said, 'and I don’t want this image.' "

Nevertheless, Nadal's historic bid has fizzled out, and for the first time in almost a year, men's tennis will crown a Grand Slam champion not named Rafael Nadal.

For the latest Australian Open coverage, follow Wertheim's and Lawrence's work at SI.com.

Here's what to watch today (all times Eastern):

No. 7 Texas at Oklahoma State (7:30 p.m., ESPN)
The Longhorns snapped Kansas' 69-game home winning streak the last time out and look to continue their strong play against the Cowboys, who haven't lost at home since Texas beat them there in February.

San Antonio Spurs at Utah Jazz (9:30 p.m., ESPN)
The Jazz were thumped by the Lakers on Tuesday and now have to face the NBA-best Spurs, who downed them 94-82 on November 19 in their first meeting.

18: Consecutive losses for the Cleveland Cavaliers after falling 112-95 to the Boston Celtics on Tuesday. The Cavs have lost 27 of 28 since Thanksgiving and are one short of tying the franchise record for losses in a row set in 1981-82.

2004: The last time Tiger Woods lost when he teed it up at Torrey Pines, the site of this weekend's Farmer's Insurance Open and Woods' first PGA Tour tournament of 2011.

$170 million: Amount college football conferences will rake in from this year's Bowl Championship Series, including a record $24.7 million to the five conferences that don't receive automatic BCS bids.