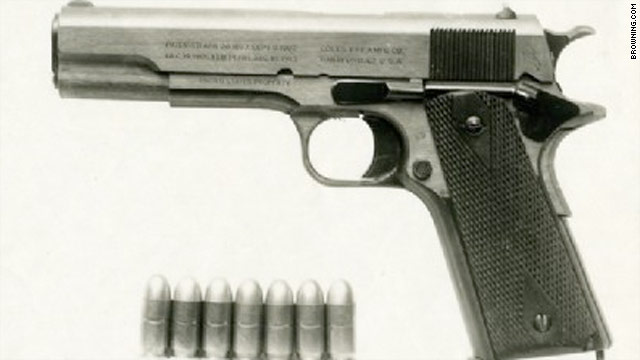 Utah may adopt a state gun

Utah has a state flower, a state fossil, a state cooking pot and 21 other official symbols. It might soon add a state gun.

The state House passed a measure Wednesday, by a 51-19 vote, that would make the Browning M1911 pistol - designed by Utah’s John Moses Browning in the early 20th century - the state firearm. The bill now goes to the state Senate.

The bill's sponsor, Republican Rep. Carl Wimmer, has said the measure aims to honor Browning. His M1911 was used as a standard U.S. Army sidearm from 1911 to 1985, according to the Browning manufacturing company's website and Jane's Infantry Weapons.

The measure has attracted criticism from anti-gun activists and some state House members. Some lawmakers argued in debate Wednesday that it was insensitive after the January 8 shooting in Tucson, Arizona, that killed six and wounded 13, including U.S. Rep. Gabrielle Giffords, according to The Salt Lake Tribune.

One state lawmaker, Democratic Rep. Carol Moss, said during Wednesday's debate on the House floor that in addition to her concerns regarding the Arizona shooting, she was worried that children would see things such as coloring books featuring the gun along with the other state symbols, the Tribune reported.

Steve Gunn of the Gun Violence Prevention Center told CNN affiliate KSL last month - before the Tuscon shooting - that he thought the proposal was in bad taste.

"I would nominate arsenic as our state poison, because, of course arsenic is often a byproduct of our state mining industry," Gunn sarcastically told KSL in December.

Wimmer told KSL this week that "this pistol is Utah," and its history "is emblazoned on our state." He added that rather than gloryfying an implement of death, as he said some critics charged, "we're glorifying an implement of freedom that has defended us for 100 years."

During Wednesday's debate, one lawmaker suggested erecting a statue of Browning instead, but Wimmer countered that his plan was the only way to honor the gun designer without costing taxpayers, the Tribune reported.