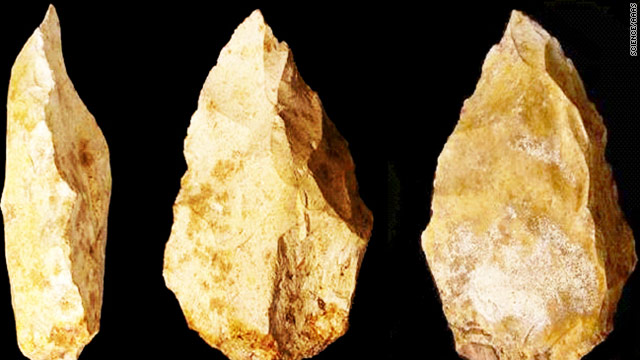 Humans may have left Africa for Eurasia earlier than believed

An international team of scientists has uncovered a tool kit that indicates that modern humans, who looked and perhaps behaved much like us, must have lived in eastern Arabia about 100,000 to 125,000 years ago. The collection of small hand axes, scrapers and other tools was found in Jebel Faya, United Arab Emirates. A report about the discovery appears in the journal Science.

The people who made these tools "are our ancestors, I have no doubt about that," said Hans-Peter Uerpmann, of the University of Tubingen in Germany, who collaborated on the project, at a press teleconference Wednesday.

But the findings still do not prove definitively that modern humans made these tools, as the researchers did not find human remains near them, said Ted Goebel, anthropologist at Texas A&M University, who was not involved in the study. They potentially could have been made by Neanderthals or Neanderthal-like hominids, who were already in Eurasia at that time, Goebel said.

Previous research suggested that modern humans first left Africa along the coast by way of the Indian Ocean rim about 60,000 years ago, based on genetic evidence.

But the tool kit suggests that humans arrived on the Arabian Peninsula much earlier. Scientists say the tool shapes, indicative of what would have been made in Africa, indicate that humans did not need technological innovation to get there.

Stanley Ambrose, an anthropologist at the University of Illinois who was not involved in the research, agreed that the structure of the axes found at the site are indicative of human-made objects from East Africa.

But, as Goebel said, human skeletons are needed to prove the connection.

"It's in Africa they produce hand axes, but also what are called foliates, leaf-shaped bifacial pieces. These simply do not occur in the rest of southwest Asia," Anthony Marks, study co-author and retired professor at Southern Methodist University in Dallas said at the teleconference.

Instead, the researchers say, environmental factors aided the humans' departure. There was a global ice age between 200,000 and 130,000 years ago, during which global sea levels fell and desert belts expanded, Marks said. During that time, modern humans would have had to stay in East Africa, as it would have been hard to cross the deserts.

But then, warmer temperatures came in about 130,000 years ago in the "interglacial" period, giving way to savanna grasses with lakes and rivers. Around that time, Marks said, the southern Red Sea had water levels about 328 feet (100 meters) lower than what's found there today, and was also much narrower. This would have facilitated an easier crossing into Arabia.

The humans could have walked, or used rafts or boats, which they were capable of making, Uerpmann said. Their descendants may have moved toward the Persian Gulf, which was smaller then, and into Mesopotamia, or eastward along the Iranian coast to the Indian subcontinent, he said.

Although there has been extensive genetic study pointing to humans' departure 60,000 years ago, there is no archaeological evidence for this, Marks said. Genetics give a sequence of happenings, but cannot say how and when the events occurred, Uerpmann said. The archaeological record is better than genetics for this reason, he said.

Still, Goebel says he is cautious because the method for dating in the study, called luminescence dating, is not much more precise than extrapolating dates from genetics, and gives a large range of possible dates of origin for objects.

See the dramatic moments when lightning strikes a boat in Florida with people aboard: cnn.com/videos/us/2022‚Ä¶
CNNweather

12:08 pm ET June 30, 2022 RETWEET
The Supreme Court curbs the federal government‚Äôs ability to fight climate change. The decision is one of the most ctwitter.com/i/web/status/1‚Ä¶HSv6
CNNweather

See the dramatic moments when lightning strikes a boat in Florida with people aboard: cnn.com/videos/us/2022‚Ä¶
CNNweather

12:08 pm ET June 30, 2022 RETWEET
The Supreme Court curbs the federal government‚Äôs ability to fight climate change. The decision is one of the most ctwitter.com/i/web/status/1‚Ä¶HSv6
CNNweather

Ketanji Brown Jackson was sworn as an associate justice to the United States Supreme Court on Thursday, making hist‚Ätwitter.com/i/web/status/1‚Ä¶Pn
cnnbrk

10:16 am ET June 30, 2022 RETWEET
The Supreme Court curbs the federal government‚Äôs ability to fight climate change. The decision is one of the most ctwitter.com/i/web/status/1‚Ä¶nygL
cnnbrk