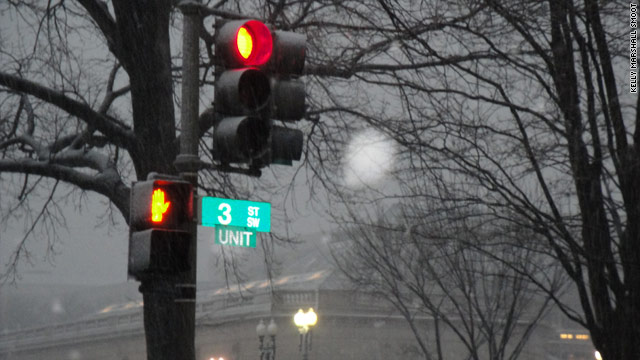 Winter weather - A winter storm is causing power outages and airport runway closings in the Northeast. New York and Boston are expected to receive 8 to 12 inches of snow before it's done, CNN meteorologist Sean Morris said. Both the District of Columbia government and¬Ýdistrict public schools will be closed all day Thursday.

Financial crisis final report - The Financial Crisis Inquiry Commission will release its report on the causes of the financial and economic crisis. The report will be delivered to the president and Congress and will be available to the public on the commission's website, through the Government Printing Office, and as a paperback and an e-book. The commission reviewed millions of pages of documents, interviewed more than 700 witnesses, and held 19 days of public hearings in New York, Washington and communities across the country.

Senate Tea Party Caucus - Tea Party activists from around the country will gather on Capitol Hill on Thursday for a question-and-answer session with three senators at the first official gathering of the Senate Tea Party Caucus. "What we're trying to do, with Rand Paul, Mike Lee, and I'm sure eventually others, is to make sure all the activists know that we're still listening," Sen. Jim DeMint, R-South Carolina, told CNN. "We want to get their input, we want to keep them up to date with what we're doing. So it's more a forum than a caucus to keep that interaction going." DeMint, along with Paul of Kentucky and Lee of Utah, are currently the only three members of the Senate Tea Party Caucus.

State of homeland security - Homeland Security Secretary Janet Napolitano is expected to officially announce Thursday that the color-coded threat alert system in place for nine years will go away in April. It will be replaced by a new system, which Napolitano will unveil at what the department is calling the "State of America's Homeland Security address" at George Washington University.

Uprising in Egypt - Egyptian Nobel Peace Prize laureate and opposition leader Mohamed ElBaradei is returning Thursday to the country, which has been convulsed by unprecedented protests for the past two days. ElBaradei will participate in protests himself on Friday, calling on longtime President Hosni Mubarak to retire, ElBaradei's brother says. Meanwhile, the Muslim Brotherhood has called for its followers to demonstrate after Friday prayers - the first time in the current round of unrest that the largest opposition bloc has told supporters to go out on the streets.

Davos World Economic Forum - CEOs, world leaders and economists from all over the world are gathered in Davos, Switzerland, to discuss the future of the global economy. This year's theme is "The New Reality." Have CEOs changed the way they run their companies? Is the new reality that growth will be stuck in single digits? A forum spokesman said "a small firework went off at the back entrance" of¬Ýthe host¬Ýhotel Thursday, causing a brief scare. Former President Bill Clinton is scheduled to attend a party Thursday night at the hotel, one of the most prestigious in Davos.

Challenger anniversary events - The 25th anniversary of the space shuttle Challenger accident is Friday, and several events are planned for Thursday:

NASA remembers the crews of Apollo 1, Challenger and Columbia, and all those who have given their lives for the sake of exploration and discovery. NASA Administrator Charles Bolden and Deputy Administrator Lori Garver will lay a wreath at Arlington National Cemetery in Virginia at 10 a.m.

A wreath will be laid at 10:30 a.m. at the Space Mirror Memorial at Kennedy Space Center. Kennedy Center director and former astronaut Bob Cabana will take part in the ceremony.

At NASA's Johnson Space Center in Houston, Center Director Michael L. Coats will be joined by astronaut family members to lay a wreath at the Astronaut Memorial Tree Grove at 12:30 p.m. ET.

@thelauracoates So my friend are you.
sarasidnerCNN

11:37 am ET April 13, 2021 RETWEET
These interactions happen to me OFF camera regularly. I'm used to it. It just so happened this was on live TV. I al‚Ätwitter.com/i/web/status/1‚Ä¶AT
sarasidnerCNN

11:36 am ET April 13, 2021 RETWEET
With an average of 3.1 million doses of Covid-19 vaccine administered each day, the US is on pace to hit another va‚Ätwitter.com/i/web/status/1‚Ä¶Iv
cnni

11:20 am ET April 13, 2021 RETWEET
@juanitocinco @JimMuessig @redsteeze I‚Äôm wrong all the time. Just don‚Äôt agree with you that I am wrong this time.
sarasidnerCNN