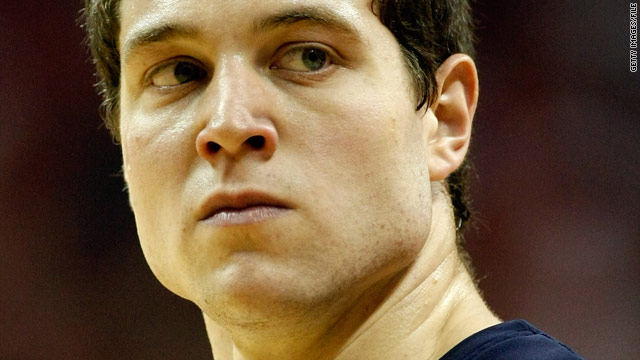 Any normal player might have gotten lost in the mayhem and hype of Brigham Young University's most anticipated basketball game in school history. Jimmer Fredette is no normal player. The senior guard led the Cougars to a 71-58 rout of No. 4 ranked San Diego State Wednesday night at the Marriott Center. Though the nail-biting action of two top-10 teams battling it out lasted until the fourth quarter, the Aztecs fell short in their attempts to stave off Fredette's offensive charge.

As SI.com’s Kelli Anderson writes: "The Aztecs, the best defensive team in the conference, threw all sorts of defenders at Fredette, from D.J. Gay to Billy White to Chase Tapley, sometimes two at a time. The defensive pressure frequently forced him to change his mind in mid-air and pass instead of shoot (and he coughed up the ball four times) but he still filled the bucket."

The game marked Fredette's 15th in which he scored 30 points or more, clearly making him one of the school's most fabled athletes and one of the year’s biggest successes. He is on track to reach a rare milestone as well: nabbing a scoring title and the National Player of the Year award. He would join Bradley’s Hersey Hawkins and Purdue’s Glenn Robinson as the only three players since 1970 to achieve the honor.

Miami Heat vs. New York Knicks (8:00 p.m., ET): The Knicks will look to capitalize on an injury-ridden Heat when they take the court against Miami tonight at Madison Square Garden.

$1: Amount Commissioner Roger Goodell said he would be willing to work for if there is a work stoppage in March. The NFL’s collective bargaining expires this spring, making the chance of a lockout a real possibility.