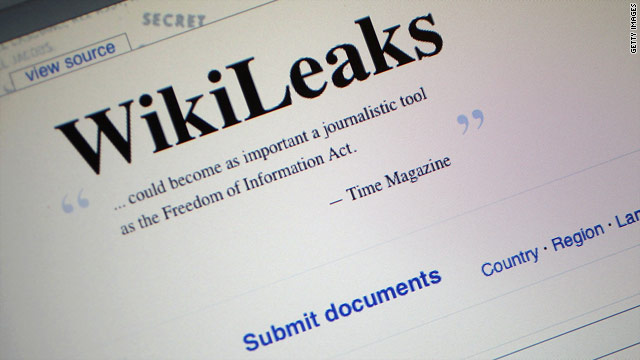 The WikiLeaks site says it’s looking for organizations “to collaborate with on our upcoming releases.”
January 27th, 2011
11:58 AM ET

Two interesting posts popped up on the WikiLeaks site today. The first is the announcement of  "The WikiLeaks Roundtable" on Tuesday, which would be the first of its "regular direct meetings with the public and press." WikiLeaks will take questions via Twitter (prefix "#wlquest" tag) and e-mail (twlrt@mail.be).  The posting didn't explain who would be answering questions, or how much time would be available for the back-and-forth. But if you have a question, e-mails will be received until 6 p.m. GMT (1 p.m. ET) on Saturday. This first digital news conference of sorts will be videotaped, the posting promises, and broadcast at 11:30 a.m. GMT (6:30 a.m. ET) on Tuesday, according to the post.

The other posting on the WikiLeaks site that caught CNN.com's attention: "WikiLeaks is looking for the most reliable and trustworthy organisations to collaborate with on our upcoming releases. If you would like to register your interest please fill out the form below. Should an appropriate collaboration opportunity present itself we will be in touch. http://wikileaks.ch/Medias.html?nocache.&#034;

Speaking of media and WikiLeaks, New York Times executive editor Bill Keller said the newspaper is considering creating an "EZ Pass lane for leakers." The in-house submission system would enable leakers to upload large files to the newspaper. The idea isn't new. Al Jazeera's Transparency Unit has long done that. The Times was one of three news organizations (the others were Germany's Der Spiegel and Britain's Guardian) that worked with WikiLeaks to publish last summer a trove of classified military intelligence about the Afghanistan war.

The Times' relationship with WikiLeaks founder Julian Assange has soured since then, as Keller wrote this week in his piece, "Dealing With Assange and the Secrets He Spilled."

In other WikiLeaks news this week, Pentagon spokesman Geoff Morrell took questions about U.S. Army soldier Bradley Manning, who is suspected of leaking classified documents to WikiLeaks. Manning's lawyer filed a complaint about conditions of the 23-year-old's confinement at a Virginia military lockup, and the military defended itself. Here's the transcript from Wednesday's Pentagon briefing.

Assange will be featured on "60 Minutes" on Sunday. Journalist Steve Kroft spent two days with Assange on the grounds of a private residence in England where Assange is under house arrest as he fights attempts to extradite him to Sweden. Swedish prosecutors want to question him about sex crime allegations.

While those angles to the WikiLeaks story play out, the world is still waiting to know what was on those discs former Swiss banker Rudolf Elmer handed to Assange recently. Perhaps that will be known by the time ex-WikiLeaks spokesman Daniel Domscheit-Berg's tell-all about WikiLeaks is published February 15.

Need a review of the WikiLeaks saga? CNN's Atika Shubert can explain, or read about the organization's Iraq war document spill here. For all of CNN.com's WikiLeaks coverage, click here.