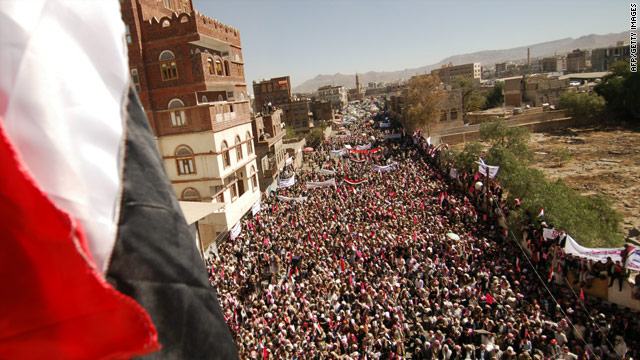 Thousands of Yemenis attend a protest Thursday calling for President Ali Abdullah Saleh to resign after being in power since 1978.
January 28th, 2011
07:50 PM ET

Behind the unrest in Yemen

The people of Yemen have joined the protests in the Middle East and Africa against long-running regimes.

The unrest in Yemen - the poorest country in the Arab world - would not be as significant on its own. Within the context of uprisings in nearby countries such as Egypt and Tunisia, however, it takes on a new meaning, said Asef Bayat, professor of sociology and Middle Easter Studies at the University of Illinois.

"The demonstrations in Egypt and Tunisia has caused a 'demonstration effect,'" says Bayat.

Half of Yemenâ€™s population is illiterate, so if the young and educated spread their message against President Ali-Abdullah Salehâ€™s 32-year reign to tribal leaders, a groundswell of tribes may join in.

1:30 am ET January 27, 2022 RETWEET
The prospect of testing positive for Covid-19 â€” and thus missing out on the chance of competing â€” looms over evetwitter.com/i/web/status/1â€¦LTGLng
cnni

12:47 am ET January 27, 2022 RETWEET
US President Biden reversed a number of the Trump administration's policies during his first year in office â€” but htwitter.com/i/web/status/1â€¦0fu0
cnni