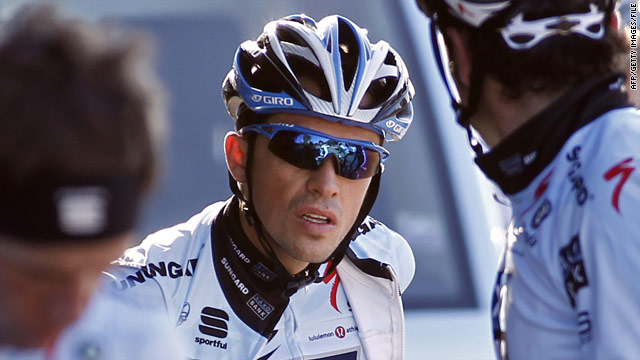 Alberto Contador is reportedly threatening to quit cycling if he's suspended for a positive banned-substance test.
January 28th, 2011
11:19 AM ET

The three-time Tour de France champion is expected to respond next week to a proposed one-year cycling ban after testing positive for a banned substance during last year’s competition, according to The Daily Telegraph in Australia.  He reportedly is threatening to quit the sport if he's banned.

Did Contador eat tainted beef, which he blames for the positive test? Is he cooperating with investigators? Either way, if the ban goes through, Contador will be the second Tour champ - Floyd Landis being the first - to be stripped of the title.

After 20 years with Time magazine, and two years with Vice President Joe Biden, Carney will become the new White House press secretary. In addition to being Time’s Washington bureau chief from 2005 to 2008, Carney was a Moscow correspondent.

Politico reports that Carney has a reputation among Washington media for having a "short fuse" and fiercely defending his boss. His wife is Claire Shipman, senior national correspondent for ABC's "Good Morning America."

The Wall Street Journal reports the hedge fund manager personally earned more than $5 billion in profits in 2010 - probably the greatest one-year haul in investing history. It tops Paulson's near $4 billion in 2007, which the paper said he earned via  "short" bets against subprime mortgages. Other elite hedge fund managers include Appaloosa Management's David Tepper and Bridgewater Associates' Ray Dalio, who raked in between $2 billion and $3 billion, respectively, according to the Journal's sources.