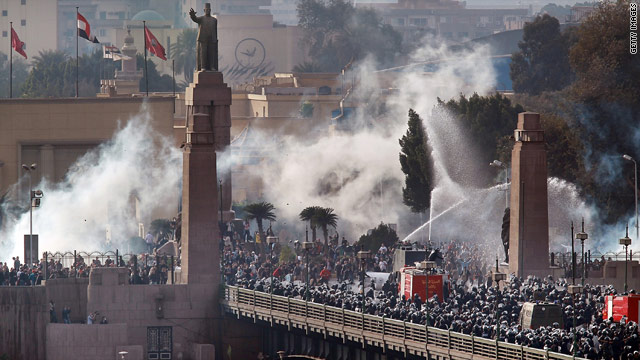 Egyptians continue protests Friday against the government. Here, police force protesters back across a bridge in Cairo.
January 28th, 2011
10:26 AM ET

On the Radar: Egypt uprisings, 25 years since Challenger, Davos

Egypt - The uprising in the African nation continued Friday as police fired tear gas into crowds in an attempt to disperse thousands of anti-government protesters. Vans filled with riot police circled Cairo neighborhoods before Friday afternoon prayers, and opposition leader Mohamed ElBaradei was placed under house arrest, a high-level security source told CNN on Friday. Keep up with minute-by-minute action right here at "This Just In."

Meanwhile, in other nations, protests broke out in the Jordanian capital, and an opposition party in Albania pushed for more protests in Tirana. Analysts said the widespread protests are part of a ripple effect that began last month in Tunisia.

Challenger - ItŌĆÖs been a quarter-century since the space shuttle Challenger exploded 73 seconds into takeoff, killing the six astronauts on aboard and teacher Christa McAuliffe. The disaster grounded the space shuttle program for three years. NASA Television will air a remembrance service honoring the crew, and June Scobee Rodgers, the widow of Cmdr. Dick Scobee, will be among the speakers. CNN will also talk to a former neighbor and Sunday school pupil of McAuliffeŌĆÖs, who says McAuliffe inspired her to become a teacher. Be sure to check out CNNŌĆÖs full coverage page, Remembering Challenger.

This year, a ŌĆ£little explosionŌĆØ at a hotel and French President Nicolas SarkozyŌĆÖs defense of the euro already have made headlines.