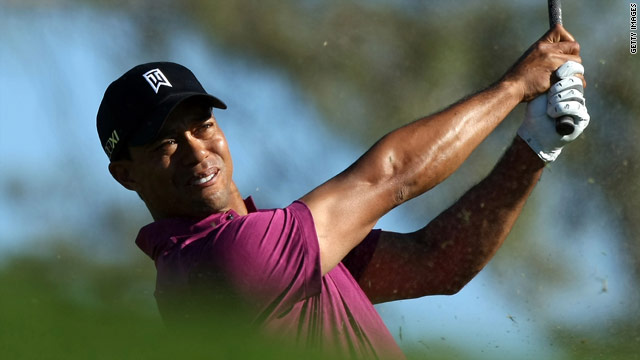 SI.com: Tiger's first round of 2011, Fisher out as Titans' coach

No longer considered the world's top golfer, spokesperson or role model, Tiger Woods is hoping a turnaround 2011 season can resurrect his career.

He teed the new season off yesterday with a respectable 3-under 69 in the first round of the Farmer’s Insurance Open at Torrey Pines. Playing the North Course, Woods turned in a bogey-free round, along with 18 holes without an incident from the gallery. The world’s former No. 1 trails rookie leader Sunghook Kang by five strokes but is in prime position to compete this weekend and build on a feel-good start.

“I'm happy with the way I played, absolutely," Woods said after the round. "I could have been a lot better if I took care of the par 5s a little bit more, but obviously, I didn't do that."

Woods mustered to hit only five fairways in his first round of 2011 but did hit 15 greens in regulation, showing some early returns from a once-again revamped swing, according to Sports Illustrated’s Alan Shipnuck. As Woods noted, he could have scored better Thursday, but in all, it was a promising start to putting behind a tumultuous – and winless – 2010 season.

Said playing partner Anthony Kim, “His swing is really coming around. He’s starting to hit some golf shots that are reminiscent of what he used to do.”

Today, Woods will switch to the South Course, considered the harder of the two Torrey Pines tracks, and look to make up ground on a youthful leaderboard. Woods is still looking for his first victory since 2009, but his eight career wins at Torrey Pines bode well for his chances this week, along with the fact that he came back from five shots or more to win four of them.

It’s an early start but one Woods desperately needed to go right. The PGA’s first major is still months away, while Tiger’s return to dominance is yet to be decided.

Woods tees off in his second round today at 1 p.m. EST, with TV coverage beginning at 3 p.m. on The Golf Channel.

Here’s what else to watch today (all times Eastern):

Winter X Games: Day 2 (7 p.m., ESPN): Tune in tonight to catch the Skiing SuperPipe Men’s Final along with the Snowboard Big Air Final and other high-flying events from Aspen.

Boston Celtics at Phoenix Suns (10:30 p.m., ESPN): The NBA’s top two assist men square off when Rajon Rondo (12.7 apg) and the Celtics take on Steve Nash (11.0 apg) and the Suns. Boston looks to win its first back-to-back road games in over a month.

17: Seasons Jeff Fisher served as the Tennessee Titans’ head coach before parting ways with the team Thursday. Fisher compiled a 142-120 record in Nashville and stood as the NFL’s longest-tenured head coach prior to his departure.

75: Years without a victory for British men in a Grand Slam singles tournament. Scotland’s Andy Murray has a chance to break the streak after beating David Ferrer 4-6, 7-6(2), 6-1, 7-6(2) to reach the Australian Open finals, where he will face Novak Djokovic.