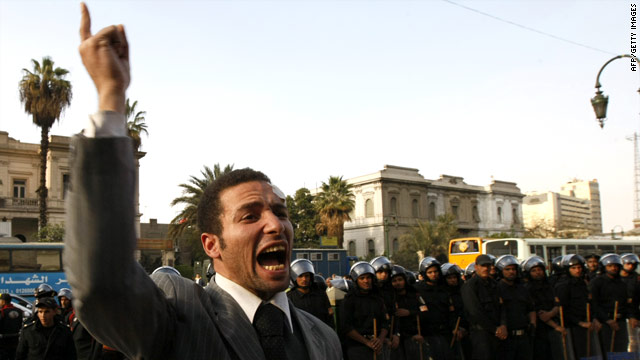 Young, educated and underemployed: the face of the Arab world's protesters

Images of unrest from the streets of Egypt and Tunisia this month revealed mostly male crowds of protesters in jeans and leather jackets, hoodies and argyle sweaters, baseball caps and flannel shirts - not exactly the bearded Islamist traditionally associated with revolt in the Arab world.

Who are these people and what are they fighting for? They are the young and unemployed, or underemployed, many with advanced degrees struggling to find jobs to support themselves and their families. Many have lived their entire lives under the same leader and want change, believing that it will lead to a better life.

Muslim-majority countries in North Africa and the Middle East have the highest percentage of young people in the world, with 60 percent of the regions' people under 30, according to study by the Pew Forum on Religion and Public Life.

With unemployment rates at 10 percent or more, those countries also have the highest regional rates of joblessness in the world, reports an article published in "Foreign Policy" titled, "The Arab World's Youth Army."

The article highlights the stories of Tunisians in their 20s who took to the streets last month to protest corruption in various levels of government and a lack of meaningful opportunities. One young man with a master's degree in computer science described a daily routine of internet job searches at a coffee shop in Sidi Bouzid, home of 26-year-old Mohamed Bouazizi, a fruit seller who burned himself to death after bribe-seeking police took his products, effectively sparking Tunisia's uprising.

In the streets of Egypt, CNN spoke with several protesters who shared similar grievances, especially after President Hosni Mubarak announced Friday that he had asked his government to resign without giving any indication that he planned to step down.

"We are one of the richest Arab countries and we want to live. Let a new government form, but if we don't get what we ask for, we will go back to the streets again and again" said Mohammed, a 20-year-old student.

"We don't care if a new government rules for 100 years to come. We just want a good, honest government. (President Zine El Abidine) Ben Ali said he understood the Tunisians and what did the Tunisians do? They kept protesting until he fled the country. We will do more and more, we will continue our demonstrations and we will do 3,000 times more of what the Tunisians did," he said.

Of course, the problem is not exclusive to the twentysomethings of the Arab world, but the complaints are the same. A resident of Shubra, an impoverished neighborhood in Cairo, said his chief concerns were corruption and economic hardship.

He spoke about the rising prices of staples such as rice, wheat and bread. He was dismissive of Mubarak's promises to bring about reform and vowed to continue protesting.

"We do not want him or the government or the parliament and we want all the corrupt people of this country to be tried for every penny they stole from this country," he said.

"We went out today and we were ready to die so our children can live with dignity."

- CNN's Saad Abedine and Salma Abdelaziz contributed to this report.