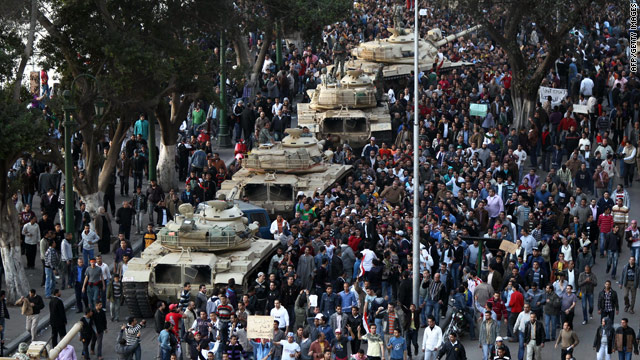 Read full coverage of the unrest in Egypt updated continually by CNN reporters worldwide. Are you there? Send your photos and video to iReport.

Thousands of demonstrators took to the streets of Egypt's major cities on Friday, Saturday and Sunday, demanding an end to President Hosni Mubarak's 30-year-rule. Here are the latest developments as confirmed by CNN.

Egypt's defense minister, Gen. Mohamad Tantawi, urged the public Sunday to obey the 4 p.m.-8 a.m. curfew (9 a.m.-1 a.m. ET) Tantawi's statement was carried by state television, and Tantawi was escorted to the network's headquarters by red-helmeted troops in a convoy of sport-utility vehcies. Tantawi is among the Cabinet ministers that Mubarak announced he was replacing over the weekend.

Also Sunday afternoon in Cairo, Al Jazeera "strongly denounces" the closure of its Cairo bureau by the Egyptian government, the news network said in a statement Sunday. Egypt's information ministry announced the shutdown of Al Jazeera in Egypt and the withdrawal of its media license to operate in the country, state-run Nile TV reported Sunday.

[Update 1:50 a.m. Cairo, 6:50 p.m. ET] - Roughly 1,000 prisoners have escaped from Prison Demu in Fayoum, southwest of Cairo, state-run Nile TV reported early Sunday. The inmates are "on the streets causing chaos and families are scared," according to Nile TV.

Twelve people were killed trying to attack a police station in Beni Suef governorate, south of Cairo, Reuters reported. Another five people died in an attempted attack on a station in Nasr City, according to Reuters.

The Egyptian Museum hosts one of the most extensive collections of Egyptian artifacts in the world, including the treasures of Tutankhamun. In addition to jewelry, sculptures and artwork, the museum boasts the Royal Mummy Room, which features the remains of several pharaohs. The artifacts were discovered around the turn of the 20th century.

In Alexandria, CNN's Nic Robertson (#NicRobertsonCNN) tweeted that gangs of machete- and iron-bar-wielding youths are stalking the deserted streets of Alexandria despite a curfew.

[Update 12:53 a.m. Cairo, 5:53 p.m. ET] - In front of military tanks, people have gathered arm in arm outside the Egyptian Museum, protecting the famed building from looters.

Israeli politician Benjamin Ben Eliezer says Egyptian President Hosni Mubarak recently told him "this is not Beirut and not Tunis." In an interview with Israeli TV on Saturday, Eliezer said that Mubarak suggested that Egyptian authorities knew what was going on and had prepared the army in advance.

In Alexandria, the scene at hospitals was chaotic, CNN's Nic Robertson said in a message on Twitter. The facilities were short-staffed and injured protesters said they were not being treated quickly enough.

[Update 8:19 p.m. Cairo, 1:19 p.m. ET] Cairo residents have given accounts of lawlessness after police withdraw from the streets. There were reports of looting and residents appealing to authorities for protection.

[Update 6:19 p.m. Cairo, 11:19 a.m. ET] Egyptian Army Chief of Staff Sami Annan was huddling Saturday with five of his deputies after returning to Egypt from Washington, a senior Egyptian military official told CNN. Annan and other top officials were attending high-level talks with Pentagon officials when this week's unrest broke out and those meetings were cut short Friday for the Egyptians to return to Cairo.

[Update 5:45 p.m. Cairo, 10:45 a.m. ET] At least five people have died from gunshot wounds near the Egyptian Interior Ministry, according to a physician at a triage center in a Cairo mosque.

[Update 5:19 p.m. Cairo, 10:19 a.m. ET] The Egyptian military is urging people "to stop the looting, chaos and the things that hurt Egypt. Protect the nation, protect Egypt, protect yourselves," according to state TV in Egypt.

British Foreign Secretary William Hague urged Mubarak on Saturday to seize the moment and carry through with reforms in Egypt.

Egypt's ruling party has accepted the resignation of Ahmed Ezz, who was one of its senior leaders and a close confidant of Mubarak's son, according to state-run Nile TV.

The Egyptian military blocked protesters who were trying to enter a central bank building, Al Arabiya is reporting.

[Update 4:40 p.m. Cairo, 9:40 a.m ET] Police are firing on demonstrators at the Interior Ministry building in Cairo, journalist Ian Lee tells CNN. Lee said he was standing over a man who appeared to have been shot in the head.

[Update 3:59 p.m. in Cairo, 8:59 ET] A tweet from Ashraf Khalil in Cairo: Was in Tahrir 10 minutes after Mubarak gave his speech. Protestors though[t] it was comical. They weren't even mad, just laughed it off.

[Update 3:31 p.m. Cairo, 8:31 a.m. ET] Thirty-eight people have died in the unrest in Egypt, including 10 members of the security forces, the state-run Nile TV reported Saturday.

"Iran expects Egyptian officials to listen to the voice of their Muslim people, respond to their rightful demands and refrain from exerting violence by security forces and police against an Islamic wave of awareness that has spread through the country in form of a popular movement," Iranian Foreign Ministry spokesman Ramin Mehmanparast said Saturday.

Tehran attaches great importance to the fulfillment of public demands in Egypt, he said.

"Iran regards demonstrations by the Muslim people of this country as a justice-seeking movement in line with their national-religious demands."

In 2009, the Iranian government carried out a bloody crackdown on political demonstrations following the suspicious landslide re-election victory of President Mahmoud Ahmadinejad.

[Update 2:25 p.m Cairo, 7:25 a.m. ET] Saudi Arabia's king told Egyptian President Hosni Mubarak that he stands with the Egyptian government. In the statement reported by the Saudi Press Agency, King Abdullah said in a Saturday phone call to Mubarak that he condemned people who have attempted "to destabilize the nation's security and stability."

[Update 2:11 p.m. Cairo, 7:11 a.m. ET] The Egyptian government has announced that the Egyptian stock market and all banks will be closed Sunday, which usually is a normal business day in the Middle East.

[Earlier] - Cell phone service was apparently restored Saturday morning, a day after the internet went dark in many parts of the country and some text messaging and cell phone services were apparently blocked amid calls for intensified protests.

- Police fired tear gas on protesters who were pushing toward the country's Interior Ministry in Cairo on Saturday.

- At least 2,000 protesters gathered in Raml Square in Alexandria on Saturday. There was no sign of police, and protests appeared peaceful. People chanted, "No for Mubarak and his dynasty."

- They also said, "The military and the people together will change the regime." Protesters smiled and shook hands with troops patrolling the area. One soldier cradled a baby and posed for a picture.

- Also on Saturday, Egyptian military tanks surrounded Cairo's Tahrir Square, where a crowd of hundreds of protesters continue growing. Demonstrators chanted, "Down with Mubarak" and "We are all Egyptians." The atmosphere was tense, but people gathered in the square were posing for pictures with tanks and shaking troops' hands.

- Tahrir Square, located near many government buildings in the heart of downtown Cairo, has been a focal point for protesters. Nearby, police fired tear gas on protesters who were pushing toward the country's Interior Ministry.

- Mubarak said in a speech Saturday morning that he asked the members of his government to resign so that he can form a new government, under his direction.

- The Egyptian leader, who has been president for 30 years, said, "We have to be careful of anything that would allow chaos." He said his primary goal was to protect Egypt's security, and he criticized looters and those who had set fires.

- Mubarak, 82, said that he heard from demonstrators who wanted more job opportunities and lower prices on key goods. According to a translation, he said, "I know all these things ... that the people are asking about it. I've never been separated from it, and I work for it every day."