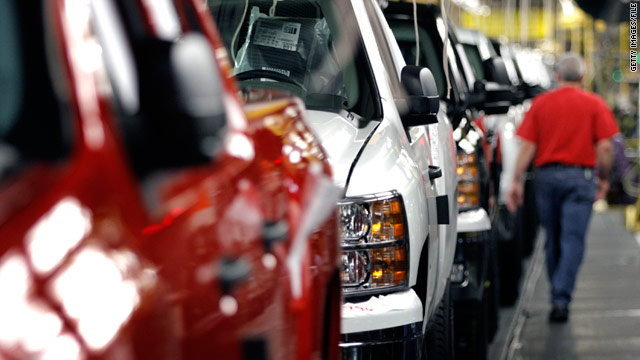 Despite new hires in the automotive industry, autoworkers are not quite ready to celebrate.
January 31st, 2011
04:24 PM ET

New hires not yet buoying the spirits of autoworkers

Autoworkers are not celebrating yet.

Second-generation GM autoworker Leonard Smith says the last time he checked, there were still some 6,000 workers laid off.

He said those who were not laid off have been transferred to other plants. He and many others have been transferred several times. Theyâ€™re called â€śGM gypsies.â€ť Smith said no one feels secure because there are still â€śflex employeesâ€ť which are temporary workers being hired and/or rehired with thousands of union workers running out of unemployment benefits.

He says, too, that with the government bailout of GM, the union now owns 17 percent of the corporation.

â€śThat seems like a conflict of interest to me,â€ť he said.

Bob King, the new president of United Auto Workers, said itâ€™s not the union that owns the shares of GM but rather the Volunteer Employee Benefit Association, a group that pays health care benefits to retired GM, Ford and Chrysler employees.

â€śThe VEBA owns only about 10 or 13 percent now,â€ť said King. â€śWe sold shares during the IPO, but we still hold a significant portion.â€ť

He also said itâ€™s not a conflict of interest.

â€śWeâ€™re all in this together,â€ť King said. â€śThe more profitable and successful the companies are, the more secure our membership is."

4:00 am ET February 7, 2023 RETWEET
Shares in Baidu soared after the Chinese search engine giant said it would be launching its own ChatGPT-style serviâ€twitter.com/i/web/status/1â€¦Pr
cnni

3:38 am ET February 7, 2023 RETWEET
Survivors are still being pulled from the rubble in Turkey and Syria, more than 24 hours after a powerful earthquakâ€twitter.com/i/web/status/1â€¦vB
cnni

3:34 am ET February 7, 2023 RETWEET
A US military intelligence report from last year that focused on Chinaâ€™s use of high-altitude balloons mentioned sitwitter.com/i/web/status/1â€¦MI9S
cnni

11:46 pm ET February 5, 2023 RETWEET
RT @AdamKinzinger: I was in a meeting where Donald Trump asked a group of us to lay off XI and China telecom ZTE because he promised XI, anâ€¦
susancandiotti