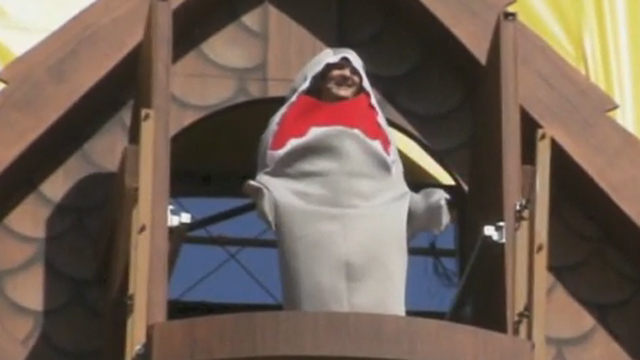 A new cereal is trying to prove it's more cuckoo than Cocoa Puffs by unveiling what may be the world's largest cuckoo clock
January 31st, 2011
11:32 AM ET

More cuckoo than Cocoa Puffs? - Struggling actors in Hollywood have a new way to lose their dignity. As part of a new cereal promotion, a 66-foot cuckoo clock has been unveiled in Los Angeles featuring actors in costume as the cuckoo bird, or, in this case, shark. The only thing that could make this video stranger is if Nick Cannon randomly showed up and... Wait, is that...?

Rushing to save two lives - Aside from the OMG moment when you see the roof collapse on this car, the part that gave us chills was what the two men inside said to their wives on their cell phones. "Lucky to be alive" doesnt' seem to do their story justice.

'Because I was brave' - A dad impales himself with a wood chisel. He lost several pints of blood and very well could have died if his three-year-old son hadn't known how to help. Watch the video to hear his plea to the 911 operator.