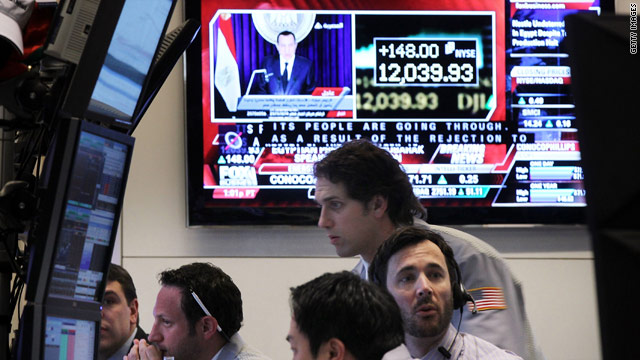 U.S. stocks started February with a bang Tuesday, with the Dow and S&P 500 closing above key psychological levels for the first time in more than two years, and the Nasdaq gaining almost 2%.

Investors overcame ongoing jitters over protests in Egypt and new developments in Jordan, where the king dismissed his government and appointed a new prime minister.

The Dow Jones industrial average rallied 148 points, or 1.3%, to finish at 12,040, the highest June 19, 2008. All but three of the 30 blue-chip components moved higher. A 5.5% jump in shares of Pfizer led the advance, with the drugmaker posting better-than-expected fourth-quarter earnings. Alcoa and Bank of America were also big Dow gainers.

The S&P 500 added 21 points, or 1.7%, to close at 1,307, also the highest since June 2008. Shares of printer manufacturer Lexmark soared more than 13% following strong earnings and an upbeat forecast.

The push to come up with a plan to reduce national debt got a bipartisan bear hug in the Senate on Tuesday.

Three lawmakers who sat on President Obama's bipartisan debt commission - Sens. Kent Conrad, Tom Coburn and Mike Crapo - convened a meeting of more than 30 senators from both parties "to make sure everyone comes to consensus on how big the problem is and how real it is," Coburn told CNN.

Sen. Ron Wyden, who attended the meeting, said senators want to figure out a serious "down payment" on debt reduction and tackle one structural problem.

"I believe there is a sense that if you're going to turn this around and grow the economy, you're going to have to deal with one, major, long-term issue this year," he said.

A ransomware group followed through on a threat to release personnel files of Washington Metropolitan Police Departâ€twitter.com/i/web/status/1â€¦Cu
cnni

9:44 pm ET May 11, 2021 RETWEET
The Biden administration has announced that it is moving forward with the US' first large-scale offshore wind projeâ€twitter.com/i/web/status/1â€¦wg
cnni

9:01 pm ET May 11, 2021 RETWEET
The Gemini North telescope in Hawaii and the Hubble Space Telescope have captured Jupiter in visible, infrared andâ€twitter.com/i/web/status/1â€¦3Q
cnni