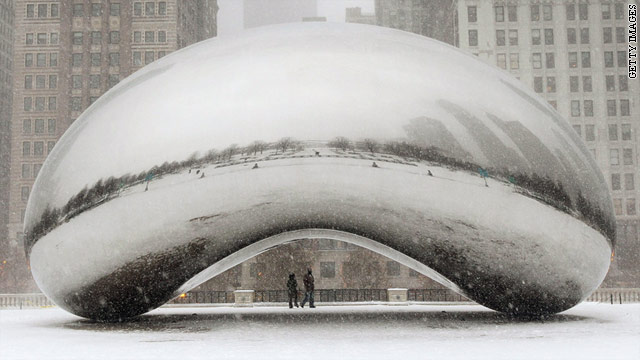 A massive snowstorm is raging across the U.S. heartland. The weather will affect areas from New England to New Mexico, and travelers should brace for as many as four days of serious storm conditions, said CNN meteorologist Rob Marciano. Travel will probably be difficult if not impossible in many areas, the National Weather Service warns.

[Update 11 p.m. ET]  Blizzard warnings were up Tuesday night in eight states - from Kansas to Ohio. The storm system formed an arc that was centered in the Great Lakes region and stretched from northeastern Kansas in the west to the edge of Chesapeake Bay in the east. The stem of the storm brought needed rain to much of the Southeast, but unwelcome ice and hard freeze warnings in other places, as far south as Corpus Christi, Texas. Parts of the Florida Panhandle, southwestern Georgia and southeastern Alabama were under tornado watches.

[Update 10:20 p.m. ET] At Chicago's Wrigley Field, a panel of the roof above the press box was damaged by the extreme winds accompanying Tuesday night's blizzard, said Peter Chase, Chicago Cubs media relations director. Part of the fiber board panel broke away, and the Cubs are working with the city to ensure there aren't any public safety issues. Police have roped off various streets and sidewalks as a precaution.

[Update 10 p.m. ET] Lake Shore Drive in downtown Chicago is shut down due to blizzard conditions, according to the Chicago Police Department. Get details from CNN affiliate WLS.

[Update 8 p.m. ET] The National Weather Service forecasts and advisories through Wednesday night read like the Abominable Snow Monster's Christmas list: Up to 14 inches of snow in South Bend, Indiana, with winds up to 30 mph; gusts of up to 38 mph in Saginaw, Michigan, with wind chills of 10 below zero the next two nights; as much as 13 inches of new snow in Berlin, New Hampshire, by Wednesday night; hard freeze warnings in Houston and Galveston, Texas. In Illinois, all major thoroughfares from I-70 and further north were covered with - or had patches of - ice and snow, according to the state Department of Transportation.

[Update 7 p.m. ET] Quincy, Massachusetts, a Boston suburb of 92,000 residents, budgeted $750,000 for snow removal this fiscal year. Before this week’s storm it had already spent double that amount, and the city expects it’ll triple its original allotment by the end of the week.   “Snow, you don’t skimp on. You have to do it,” said Chris Walker, director of policy and information for the city.

[Update 5:15 p.m. ET] In Ohio's Miami Valley, freezing rain led to power outages, with about 200 reported before 4 p.m., Dayton Power and Light told CNN affiliate WHIO-TV. With winds forecast to pick up in the evening, the utility was preparing for more. The massive storm was forecast to spawn snow, ice and bitter cold from New Mexico to Maine. Forecasters said as many as 100 million people in the United States will feel its effects.

[Update 4:15 p.m. ET]  More than 1,300 flights were canceled at the O'Hare airport in Chicago on Tuesday. Few flights, if any, are expected to operate out of the airport on Wednesday, said Karen Pride, a spokeswoman for the Chicago Department of Aviation. United Airlines, Continental Airlines and American Airlines are suspending operations at the airport after 6 p.m. ET on Tuesday.

[Update 2:30 p.m. ET] A large tent that was scheduled to shelter partiers Friday and Saturday at Super Bowl XLV has collapsed under the weight of ice and snow, CNN affiliates are reporting.

[Update 2 p.m. ET] The Tulsa, Oklahoma, National Weather Service Forecast Office recorded 12.3 inches of snow accumulation as of noon Central time on Tuesday. That makes this week's storm the largest in Tulsa's history. The largest snow storm occurred in March of 1994 when 12.9 inches of snow fell on the city. Moderate to heavy snow is still falling.

[Update 1:30 p.m. ET] The Oklahoma Department of Public Safety reports numerous vehicles stranded on the Will Rogers Turnpike in northeastern Oklahoma. The National Guard is rescuing people that are stranded in their vehicles on the turnpike, the department said. The turnpike is closed to all traffic.

[Update 1:15 p.m. ET] Dozens of flights for Wednesday are already canceled at Kansas City International Airport. Ice and snow is sweeping across the Plains.

Watch how 100 million people could be affected by the storm.

[Update 12:25 p.m. ET] A partial roof collapse at Hard Rock Casino has occurred near Tulsa, Oklahoma. No injuries have been reported.

- In Northwest Ohio, Interstate 75 is closed due to ice and wrecks.

- The roof of a lumber company has reportedly collapsed in Grand Haven, Michigan.

[Update 11:55 a.m. ET] Chicago is expected to get two feet of snow in the next 24 hours, according to the Chicago Tribune - that's more dire than what was reported earlier Tuesday. The National Weather Service is describing the storm as "potentially life-threatening" for people who venture outdoors. Winds in and near the city could gust up to 60 mph, the NWS says. Power outages are likely. Hundreds of flights at O'Hare airport have been reportedly canceled. The Chicago Weather Center is tracking.

- Several roads and highways in Oklahoma are closed, KOTV reports.

[Update 11:30 a.m. ET] Dallas Fort Worth International Airport has reopened one runway, according to airport spokesman David Magana. The airport has a total of seven runways. It was closed Tuesday at 9:15 a.m. due to ice. Magana says DFW officials are expecting 400 to 500 flight cancellations today. Normal air traffic for DFW is 800 daily flights.

- Wind chills in Omaha, Nebraska, are expected to reach -25 degrees overnight with actual highs only in the single digits on Wednesday, KETV reports.

[Update 11:10 a.m. ET] Detroit officials are saying it could be the worst snow storm to strike since 2005 when 12.2 inches fell. Seven to 12 inches of snow is expected to fall across metro Detroit late Tuesday night and into Wednesday.  The record is 24.5 inches set April 6, 1886. For a comprehensive look at conditions, click here.

- Four states are under a state of emergency and have called in the National Guard. They are  Missouri, Oklahoma, Kansas and Illinois.

[10:55 a.m. ET] Four thousand flights have been canceled due to the bad weather. Eight states have active blizzard warnings. In Oklahoma, snow is falling at 2 to 3 inches per hour.

[10:47 a.m. ET] Dallas Cowboys stadium sacked with snow. Road conditions in Dallas are terrible in these few days left before Super Bowl XLV happens at the stadium in Arlington.

[Update 10:10 a.m. ET] Sleet is coming down in St. Louis where ice already coats trees, CNN's Reynolds Wolf reports from the Missouri city. Subzero temperatures are expected across the Plains.

- New Yorkers are preparing for snow as mounds already piled on Long Island.

[9:25 a.m. ET] Ice has closed Dallas Fort Worth International Airport and at least 300 outbound flights were canceled, spokesman David Magana said. Meanwhile, Dallas' Love Field is down to one open runway, according to the FAA.

- Blizzard conditions expected across portions of eight states, from Oklahoma to Michigan. Winds gusting up to 40 mph are predicted.

- Oklahoma is under a state of emergency, and Missouri has mobilized 600 National Guard troops to help cope with the storm.

- Chicago is going to get hit hard, forecasters said. Combined snow totals through Wednesday may exceed a foot and a half across much of northern Illinois and far northwest Indiana, according to the National Weather Service.