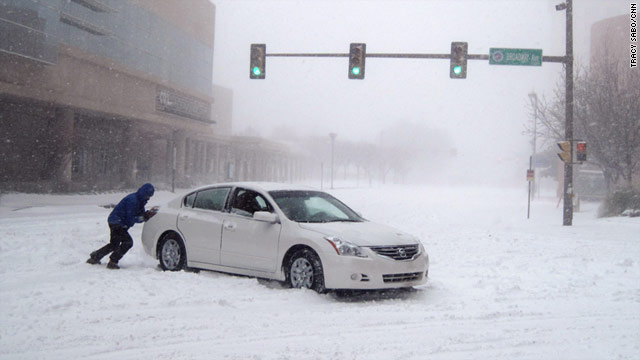 Blinding snow hits Plains, Midwest: A vast winter storm on Tuesday blasted much of the nation with nearly horizontal blowing snow, cloaking trees and power lines with ice up to an inch thick, forcing airports to close and complicating the travel plans of fans headed to this weekend's Super Bowl in Texas.

Mubarak says he won't run again; protesters say it's not enough:Â Bowing to eight days of protests, Egyptian President Hosni Mubarak said Tuesday he will not seek office again in elections scheduled for September, but vowed to stay in the country and finish his term.

Authorities believe body found in California canal is abducted boy: California authorities extended their condolences Tuesday to the family of Juliani Cardenas, 4, after a body was found that they say matches his physical description.

7 teens arrested in recorded beating of bullying victim:Â Â A 13-year-old boy who was attacked while walking home from school earlier this month in a Philadelphia suburb said Tuesday that he had been bullied since the beginning of classes.

A stray Shih Tzu needed a haircut so badly you could barely tell it was a dog. But post-shave, a star is born. CNN'â€twitter.com/i/web/status/1â€¦by
cnni

9:22 pm ET June 17, 2021 RETWEET
NASA wants to return to the moon, and astronauts will need some wheels when they get there. GM has teamed up withâ€twitter.com/i/web/status/1â€¦Ea
cnni

8:42 pm ET June 17, 2021 RETWEET
Tennis star Naomi Osaka has withdrawn from this year's Wimbledon but is planning on returning at the Tokyo Olympicsâ€twitter.com/i/web/status/1â€¦53
cnni

8:21 pm ET June 17, 2021 RETWEET
A glider pilot got up close and personal with a twister. CNN's Jeanne Moos puts her spin on the amazing video. cnn.it/2UdWeJg
CNNweather