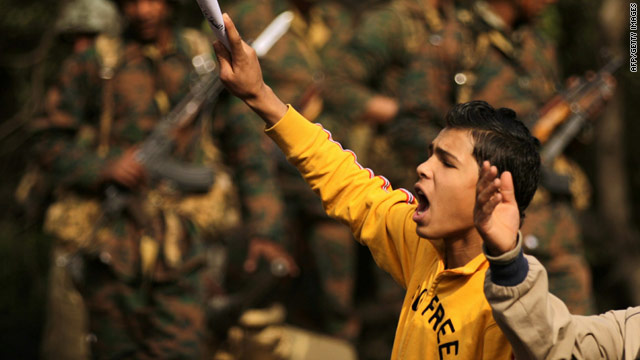 Thousands of American tourists and residents are fleeing Cairo, taking State Department-chartered flights sent to ferry American citizens out of the escalating crisis zone. But amid the chaos, one young American woman has decided to stay and document the uprising from the frontlines.

Lauren Bohn, a 23-year-old Fulbright Fellow studying Arabic and journalism at American University in Cairo, told CNN's "American Morning" on Tuesday what she is seeing on the ground and what prompted her to remain in Cairo.

"I've been caught in some tear gas and bumped around a few times, but, if anything, the people here on the ground are very protective of foreigners," Bohn says.

"It's been essentially a media blackstorm," Bohn said about reports of media outages in Cairo. "I was able to tweet yesterday for about an hour. I found internet. I can't tell you where I found it, but I was able to upload some video and people have been able to call me on my cell phone, on my Blackberry."

Bohn said although she's been unable to make outgoing international calls, she can receive them. "It's been completely demobilizing, and, of course, that's the whole point," she said.

She said she has not felt any danger or hostility toward Americans from demonstrators.

"They want to make sure that the U.S. government is hearing them."

Just a little more than halfway into January, the US has added a staggering 3.9 million new Covid-19 cases and moreâ€twitter.com/i/web/status/1â€¦PC
cnni

9:15 am ET January 18, 2021 RETWEET
BREAKING: Kremlin critic Alexey Navalny is ordered to remain in custody, less than 24 hours after he was arrested oâ€twitter.com/i/web/status/1â€¦Ll
cnni

9:03 am ET January 18, 2021 RETWEET
Lionel Messi was shown the first red card of his Barcelona career, as Ronald Koeman's side suffered a 3-2 extra-timâ€twitter.com/i/web/status/1â€¦vR
cnni