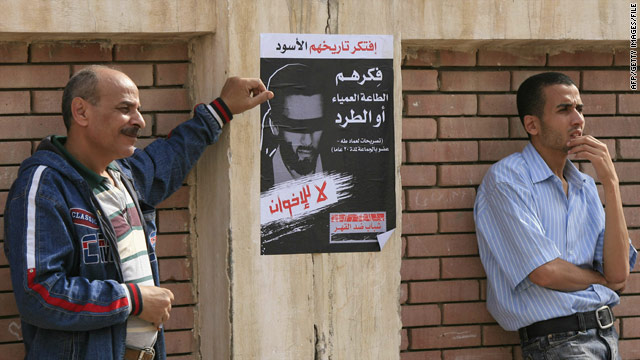 Two Egyptian men hang out in Alexandria near a poster with a message against Egypt's Muslim Brotherhood.
February 1st, 2011
10:23 AM ET

Who are the Muslim Brotherhood?

The scenes in Egypt have been dramatic, as thousands turn out onto the streets demanding that President Hosni Mubarak resign after 30 years in power. Few images have been more powerful than those of demonstrators dropping to the ground to pray in the face of security forces. And while some have been inspired by the role of religious faith in the protests, there are definite worries that the banned Muslim Brotherhood is waiting in the wings, hoping for a chance to take over.

The Muslim Brotherhood has been part of the political scene in Egypt for more than 80 years and advocates a move away from secularism and a return to the rules of the Quran. It's the oldest and largest opposition group in Egypt and is illegal under Egyptian law. And while the Brotherhood officially rejects the use of violent means to secure its goals, offshoots of the group have been linked to attacks in the past.

Learn more about the Muslim Brotherhood.