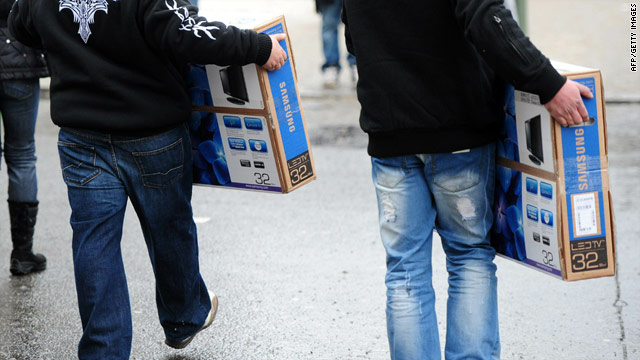 Big TV bargains for the Super Bowl: The week before the Super Bowl typically brings sales of up to 10% off the listed price for flat-screen TVs. But weak holiday sales are leading to even steeper discounts of 20% to 30%. And from ogres to hot chicks, here's a sneak peek at this year’s hot Super Bowl ads.

U.S. seizes 10 sports streaming websites: Each of the seized sites aggregated illegal, pirated broadcasts and provided links to site visitors. Some of the world's biggest sports leagues were allegedly victimized, including the NFL, NBA, NHL, WWE and UFC.

Hey Congress: We need more money! It's not unusual for agencies to argue that budget cuts will harm their ability to do their jobs, but the current uncertainty is raising alarms. Without additional funding, training for troops will be reduced, overall military readiness will be hurt and pilots will get less flight time.

No inflation? Check out food: Food commodities such as wheat, corn and cocoa are spiking. You might even find yourself paying more for beef as cattle prices keep rising.

Shortage of o.b. tampons. There's a black market for that: In January, Johnson & Johnson said its mysteriously absent o.b. tampons had started being shipped to retailers, but it's February and there still are no tampons on the shelves. But they are showing up on eBay and Amazon for three times the price.