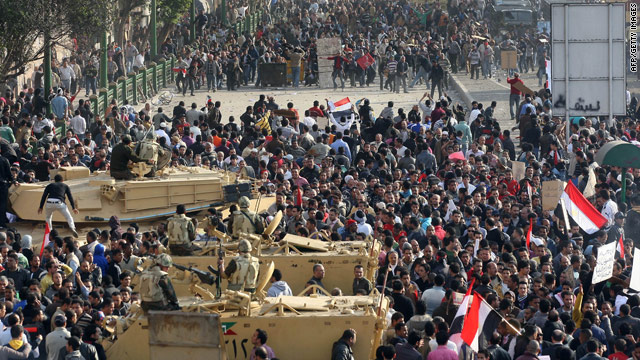 ï»¿Outside our window, it sounds like a castle siege during medieval times: thousands of voices and the repetitive clank of militants digging up stones and pillaging construction material for protective barricades.

This afternoon, a man in a gray shirt stood in the middle of the street in Tahrir, speaking aloud and holding his hand over his heart - apparently overwhelmed by the violence.

Some of the many bleeding men we've seen carried back from the front lines are placed on the pavement around what was a traffic cop's station under our window. Women give them water and use cotton to swab the blood.

At one point, about 10 soldiers sprinted out of the gates of the Egyptian Museum into the melee. They returned soon after, one of them carrying a box of supplies on his head. They were sitting out the vicious battle that was raging just a few yards from their position.

We see periodic terrifying scenes of brutality, such as when bloodied prisoners from the pro-regime side are dragged toward the center of the square by agitated men who beat and kick them along the way. I saw a man rip the hair off one of these captives.

We arrived just as the battle erupted. People started panicking, and hundreds sprinted in our direction. Then the hail of stones began flying both directions. Cameraman Joe Duran and I took shelter behind a blue police transport truck that was torched and abandoned days ago. A crying middle-aged Egyptian woman stood with us. We then ran, ducking, towards the entrance of our little Tahrir Square hotel, screaming as the doorman fumbled with the lock on the chain that has kept the door closed.

We squeezed in, barely, but are now trapped along with the thousands of opposition demonstrators who are battling now for their lives. They are armed with sticks and stones. The pro-regime faction, some of whom chased us down a street moments before the battle erupted, began hurling petrol bombs at the opposition as the sun set over the Egyptian capital.