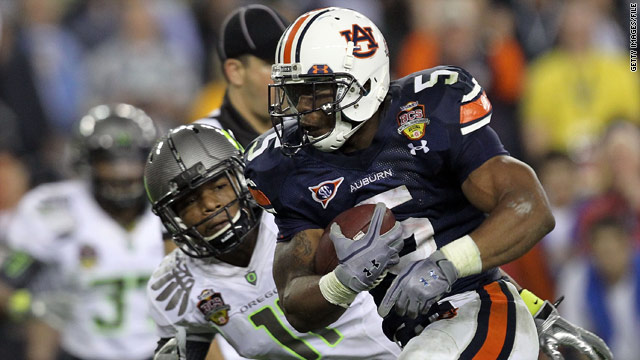 Groundhog Day isn’t the only holiday being celebrated across the country today.

February 2 also marks National Signing Day, the day when uncommitted high school football stars announce their much-anticipated decisions on where they will play college football. Coaches huddle around fax machines all day eagerly awaiting national letters of intent to come in while rabid fans scour the internet for the first indication their team might have landed a big-time recruit.

Much like the news of whether Punxsutawney Phil sees his shadow or not (he did not!), National Signing Day is more of a ritual than anything. It is one of the biggest days on the college football calendar, yet a majority of recruits have already made their college decisions. Prior to Wednesday, only 12 of 247Sports.com’s top 100 recruits from the Class of 2011 had to yet commit, but three of the top five remain undecided, including No. 1 overall prospect Jadeveon Clowney, a defensive end measuring in at 6’5”, 255 pounds.

With announcements rolling in throughout the day, SI.com’s Andy Staples is live blogging the event and providing instant updates and analysis as the decisions come in. Click here to follow the action and check out SI.com all day for more news regarding National Signing Day.

Here is what to watch otherwise:

No. 17 Syracuse at No. 6 Connecticut (7 p.m., ESPN): Syracuse has never lost five straight games under Jim Boeheim, but is in danger of doing so after dropping four in a row. To break the streak, they’ll have to upset the Huskies, who are coming off a loss of their own but have beaten the Orange in their last seven meetings.

New Orleans Hornets at Oklahoma City Thunder (8 p.m., NBA TV): Kevin Durant and the Thunder are reeling from a last-second loss to Miami on Sunday while the struggling Hornets have dropped four of seven. Both teams hope to bounce back tonight and improve their standing in a tight Western Conference race.

2.9 – Seconds remaining when Ole Miss guard Chris Warren drained a high-arcing 3-pointer to beat No. 10 Kentucky on Tuesday. The 71-69 win marked the Rebels’ first victory over a top 10 team since 2002.

355 – Consecutive passes thrown without an interception this season by Patriots quarterback Tom Brady, an NFL record. Brady won the AP’s NFL Offensive Player of the Year award Tuesday by receiving 21 of the nationwide panel’s 50 votes.

67.2 – Average passer rating by quarterbacks against the Green Bay Packers this season, the lowest in the NFL. The Pittsburgh Steelers’ defense held opposing QBs to the second-lowest rating with 73.8. SI.com's Kerry J. Byrne explains why it's no coincidence these teams made it to Super Bowl XLV.