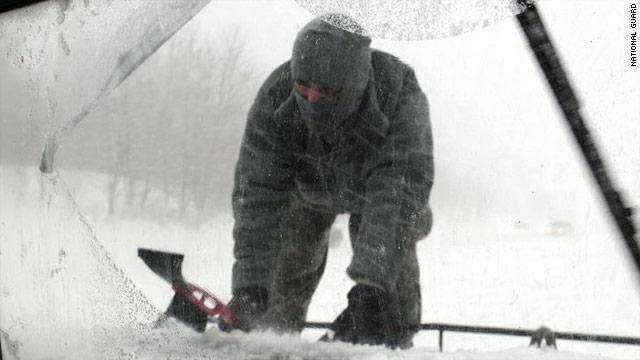 Spc. Daniel Logrosso of Springfield, Illinois, removes ice from a Humvee windshield Tuesday. About 500 Illinois National Guard members were called out to deal with the snowstorm.
February 3rd, 2011
10:41 AM ET

Bitter cold, with some more snow and ice mixed in, will follow the monster storm that dominated much of the country earlier in the week. Wisconsin can expect wind-chill values between 20 and 25 degrees below zero Fahrenheit, and parts of Maine and New Hampshire can expect several inches of new snow, the National Weather Service said. Sleet and freezing rain are expected along the Gulf Coast. All of this is coming as vast areas try to clear streets and restore electricity after the massive storm that brought as much as 2 feet of snow to some locales.

Australians are still feeling the effects of Cyclone Yasi, whose torrential rain and high winds have knocked out power to large portions of the country's northeast.

Meanwhile, in Jordan, the main IslamistÂ  group says it plans further street demonstrations Friday in the capital to protest the appointment of a new prime minister by King Abdullah II. The Islamic Action Front, the political wing of the Muslim Brotherhood, has rejected talks with new Prime Minister Marouf al Bakhit, who is forming a new government. But several of its representatives will be meeting the king later Thursday.

And in Yemen, thousands of anti-government protesters gathered near Sanaa University, indicating many in the country were not satisfied with President Ali Abdullah Saleh's recent announcement that he would not seek re-election. About a kilometer away, a large crowd of government supporters gathered for a demonstration.

Senate Homeland Security and Governmental Affairs Committee Chairman Joe Lieberman and Ranking Member Susan Collins will hold a news conference at noon to release their bipartisan report on the failures of the U.S. government to prevent the November 5, 2009, shooting at Fort Hood Army Post that killed 13 people and wounded 32 others.

Today marks the beginning of year 4709 on the Chinese calendar, the Year of the Rabbit. Celebrations were taking place across Asia.

3:16 am ET May 17, 2022 RETWEET
Devastating fires, deadly heat waves, and unprecedented flooding have all been headlines of the growing climate criâ€twitter.com/i/web/status/1â€¦SO
CNNweather

3:23 pm ET May 16, 2022 RETWEET
The Calf Canyon/Hermits Peak Fire in New Mexico has become the largest fire in the state's history and â€śsudden andtwitter.com/i/web/status/1â€¦oMzB
CNNweather

1:46 pm ET May 16, 2022 RETWEET
By this evening, damaging winds, large hail and even tornadoes will tear through the country's most densely populatâ€twitter.com/i/web/status/1â€¦YT
CNNweather