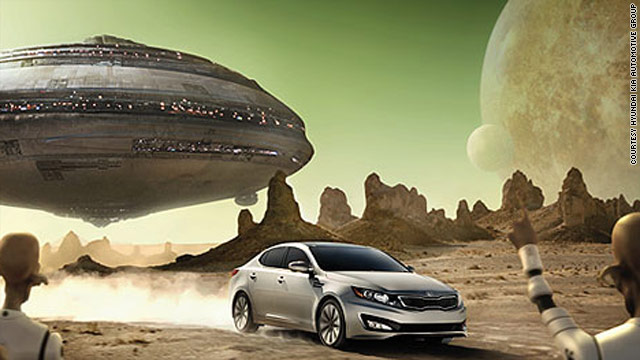 In Kia's Super Bowl ad, aliens are more impressed with the Kia Optima than their own spaceship.
February 4th, 2011
05:24 PM ET

Cashing in on snowstorms: With record amounts of snow blanketing some of the nation's warmest cities this winter, an increasing number of companies are protecting themselves by betting on snow. And it can really pay off.

Mets' owners: $300 million in Madoff profit? The owners of the New York Mets, the Wilpon and Katz families, are accused of being aware of concerns about what proved to be the biggest Ponzi scheme ever. The court-appointed trustee in the Madoff Ponzi case accused the owners of reaping $300 million in profit from the scheme.

Carmakers driven to advertise on Super Bowl: Just two years after the U.S. auto industry was nearly wiped out, automakers are back with a vengeance in this year's Super Bowl. Nine companies are purchasing multimillion-dollar spots for the big game. Check out some past rejected Super Bowl ads.

White House: Innovate, educate, win! President Obama wants to add 100,000 math, science, technology and engineering teachers by the end of the decade, extend wireless internet coverage to 98% of the population and have 80% of the nation's electricity come from clean energy sources by 2035.

$7,500 electric car discount scares dealers: The Obama administration has a plan that would put up to $7,500 directly in the hands of car buyers without having them jump through any tax hoops. There is a tax credit for plug-in vehicles, but as it stands now, car buyers have to wait until tax time to get any money back. Meanwhile, excess is back as Ferrari sales soar.