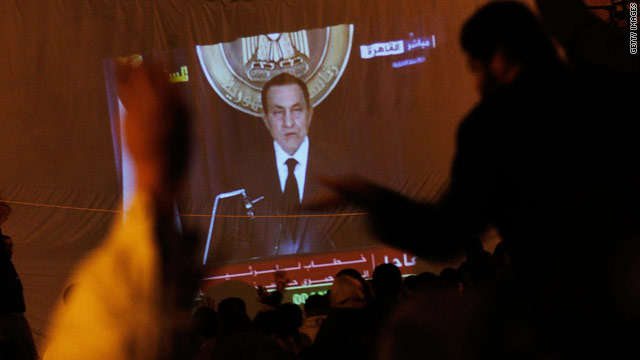 Check out a complete timeline of the unrest in Egypt.

It's been almost two weeks since 20,000 protesters spilled into the streets of Cairo in an unprecedented display of anti-government rage, inspired in part by revolts in Tunisia that forced the collapse of Zine El Abidine Ben Ali's 23-year rule.

Organizers of the January 25 protests┬Āthat triggered the unrest chose that day - Police Day - to highlight the role of police corruption in addition to frustrations over the rising cost of living and failed economic policies. But all those concerns were distilled into one overriding demand: the resignation of President Hosni┬ĀMubarak, who has survived would-be assassins and illness, crushed a rising Islamist radical movement and maintained the peace with neighboring Israel that got his predecessor killed to rule Egypt for three decades. (More on Mubarak's reign)

Initially, it appeared that Mubarak had no intention of abandoning his post. Over time, he has taken steps that appear to some as gradual steps toward relinquishing power, and to others, mere gestures. Below we chart the major events in the apparent tide of transition:

January 29 - In a speech shortly after midnight, Mubarak announces that he has asked his cabinet to resign and acknowledges the "legitimate demand" for political and economic reforms. He gives no indication that he plans to step down.

Later Saturday, the Egyptian cabinet presents its resignation in response to Mubarak's request. Ahmed Shafik, ’╗┐’╗┐’╗┐a minister from the cabinet that resigned, is appointed to form a new government, state TV reported. Omar Suleiman, a former head of intelligence, is appointed presidential deputy, or vice president.

Egypt's ruling party accepts the resignation of Ahmed Ezz, who was one of its senior leaders and a close confidant of Mubarak's son, according to state-run Nile TV.

January 31 - On the eve of a planned "march of millions," Vice President Omar Suleiman announces the government has begun discussions with opposition parties’╗┐ on "constitutional reform and legislation," promising plans will be drawn up "expeditiously."

February 1 - Mubarak announces he will not seek a new term┬Āin September's elections, saying he had "spent enough time serving Egypt," but vows to stay in the country and finish his current term.

"My first responsibility now is to restore the stability and security of the homeland, to achieve a peaceful transition of power in an environment that will protect Egypt and Egyptians, and which will allow for the responsibility to be given to whoever the people elect in the forthcoming elections," Mubarak said in a televised address Tuesday night.

The announcement fell flat in Cairo's Tahrir┬ĀSquare, where thousands of protesters erupted in chants of "Down with Mubarak!" and "The people want the president to be judged!" Some waved shoes in the air - a deep insult in the Arab world - and said they would continue their demonstrations until Mubarak quits outright.

Mohamed ElBaradei, the Nobel Peace Prize winner who has become a leading opposition figure, said Mubarak's decision was "an act of deception" that would only "extend the agony."

February 3 - Mubarak tells ABC News that he's fed up and would like to resign but fears his immediate resignation would plunge Egypt into further chaos.

February 5 - Key members of the embattled ruling party, including President Hosni Mubarak's once heir-apparent son, resign their party leadership posts as the vice begins began talks with opposition leaders. In the strongest gesture yet to satisfy angry Egyptians who have been protesting for 12 days, members of the general secretariat of the ruling National Democratic Party stepped down from those leadership positions, state television reported.

The restructuring included the elevation of Housam┬ĀBadrawi, a more liberal-minded politician who is taking over as the ruling party's secretary-general. Gamal Mubarak's resignation effectively puts to rest a widespread belief that the embattled president was preparing for a dynastic handover.

Mubarak's foes questioned whether the moves are meaningful or merely cosmetic.

ElBaradei┬Ādismissed the resignations as another in a series of small, hiccuping reforms. Mubarak, he said, has shown no sign he understands the people want a complete overhaul.

"It's about the whole shift to democracy," said ElBaradei, a Nobel laureate whose National Association for Change wants to see an immediate change in power. "I'm ready to engage when we believe that Mr. Mubarak is ready to step down."

Demonstrators on the streets also felt Mubarak was just trying to appease the people.

"This is just part of the drama that the regime is playing, a maneuver, just a sedative to calm down the masses," said Mohammed Mahmoud in the coastal city of Alexandria. "We need a peaceful transition and we know very well what the regime is trying to do. They are trying to buy time, so they can smuggle their money out of the country, the money that they robbed from the Egyptian people all these years."

This pilot drew a unique tribute to George Floyd over Canada by following a flight path in the shape of a raised fiŌĆtwitter.com/i/web/status/1ŌĆ”yy
cnni

1:48 pm ET June 6, 2020 RETWEET
New Zealand said that it will provide free sanitary products in schools across the country in an effort to tackle pŌĆtwitter.com/i/web/status/1ŌĆ”a2
cnni

1:18 pm ET June 6, 2020 RETWEET
The US' credibility has taken a dent over the past two weeks. Diplomats said the events at home were "scary" and "hŌĆtwitter.com/i/web/status/1ŌĆ”j1
cnni

12:30 pm ET June 6, 2020 RETWEET
Thousands of peaceful protesters have gathered in London and across Europe for the second consecutive weekend, protŌĆtwitter.com/i/web/status/1ŌĆ”ye
cnni