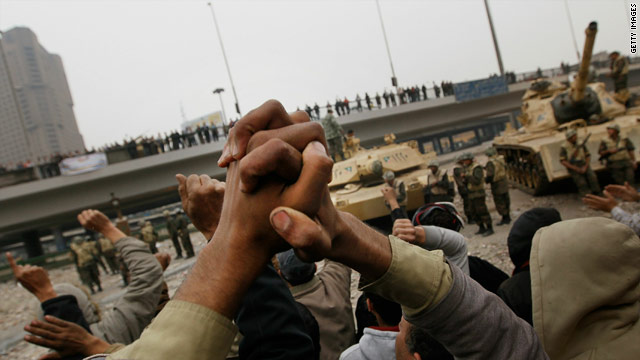 Read full coverage and examine a timeline of the unrest in Egypt updated continually by CNN reporters worldwide. Send your photos and video to iReport and see CNN in Arabic here. See also this strong roundup of timely, insightful views on the wave of upheaval in the Arab world.

[Update 3:00 a.m. in Cairo, 8:00 p.m. ET] New glimpses emerged Saturday into the sensitive diplomatic strategy the Obama administration is using to help bring about a transition in which Mubarak himself helps to dismantle his own power structure.

"There are forces in at work in any society," Clinton said, "in particular in one that is facing these kinds of challenges, who will try to derail or overtake the process to pursue their own specific agenda, which is why I think it's important to support the transition process announced by the Egyptian government actually headed by now-Vice President Omar Suleiman."

[Update 1:15 a.m. in Cairo, 6:15 p.m. ET] U.S. President Barack Obama emphasized the importance of an "orderly, peaceful transition" to a government that is "responsive to the aspirations of the Egyptian people." In phone calls with foreign leaders Saturday, Obama also urged "credible, inclusive negotiations between the government and the opposition," according to the White House.

"He stressed the need for a concrete reform agenda, a clear timeline, and immediate steps that demonstrate to the public and the opposition that the Egyptian government is committed to reform," according to the White House.

Biden also called for the immediate release of journalists and activists
who have been detained without cause, the White House said.

[Update 11:45 p.m. in Cairo, 4:45 p.m. ET] It's just after midnight in Cairo and anti-Mubarak protesters are still standing their ground in Tahrir Square in defiance of a government curfew for the 12th night in a row, CNN's Ivan Watson reports.

[Update 11:45 p.m. in Cairo, 4:45 p.m. ET] Israeli President Shimon Peres defended the Egyptian president, saying, "In spite of all the attacks against President Mubarak, I know him for many years, throughout his presidency and I accredit him as one of the persons who saved many lives by preventing war in the Middle East, who saved lives of Egyptians, of Arabs, of Israelis, by not allowing to renew a war."

[Update 10:45 p.m. in Cairo, 3:45 p.m. ET] Anti-government rallies outside of Egypt continued Saturday in major cities worldwide, including New York, Washington, Atlanta, Paris, France, and the West Bank. In Washington, iReporter Inga Lukaviciute captured video of a group of loud but peaceful protesters carrying signs and Egyptians flags as they marched from the Egyptian embassy to the White House chanting anti-Mubarak slogans.

[Update 10:00 p.m. in Cairo, 3:00 p.m. ET] Egyptian President Hosni Mubarak "remains utterly critical in the days ahead as we sort our way toward the future," and must stay in office, President Barack Obama's point man for Egypt, Frank Wisner, said Saturday at the Munich Security Conference in Germany.

Wisner is the diplomatic official who delivered a message from President Barack Obama's administration to Egypt's leadership this week.

In response, U.S. State Department spokesman P.J. Crowley said that
Wisner is no longer acting in any official capacity.

"We have great respect for Frank Wisner and we were deeply appreciative of his willingness to travel to Egypt last week. He has not continued in any official capacity following the trip. The views he expressed today are his own. He did not coordinate his comments with the U.S. government," Crowley said.

"As the president has repeatedly said, Egyptians will be the ones that decide how this transition occurs," said Tommy Vietor, spokesman for the U.S. National Security Council, on Gamal Mubarak's resignation. "We welcome any step that provides credibility to that process."

"We view this as a positive step toward the political change that will be necessary, and look forward to additional steps," an administration official said.

[Update 7:20 p.m. in Cairo, 12:20 p.m. ET] Members of the general secretariat of Egypt's ruling National Democratic Party submitted their resignations, state TV reported. It did not confirm an earlier report that President Hosni Mubarak had resigned from his party post.

[Update 6:46 p.m. in Cairo, 11:46 a.m. ET] President Hosni Mubarak has resigned as head of the National Democratic Party, along with other members of the party's general secretariat, state TV reported.

[Update 6:03 p.m. in Cairo, 11:03 a.m. ET] The U.S. State Department said it was operating one flight Saturday to evacuate U.S. citizens from Egypt. It was headed for Athens, Greece. There was no word on how many Americans would be transported.

[Update 5:58 p.m. in Cairo, 10:58 a.m. ET] Amnesty International is urging an investigation into the detention of 35 journalists and human rights activists documenting the crisis in Egypt. Two who were detained are staff members for the human rights group. They were freed after spending two days in military custody.

At a news conference Saturday, Interior Ministry spokesman Ismail Othman said, "The army remains neutral and is not taking sides because if we protect one side we will be perceived as bias ... our role is to prevent clashes and chaos as we separate the opposing groups."

[Update 4:48 p.m. in Cairo, 9:48 a.m. ET] Khaled Serri Seyam, the head of the Egyptian stock market, told the official Egyptian news agency that the decision to reopen the market on Monday is now canceled and that the stock market will stay closed for now.

[Update 4:09 p.m. in Cairo, 9:09 a.m. ET] The German diplomat who said there was an assassination attempt against Egypt's new vice president has retracted his comments. "I was led to believe that we had a confirmed report but in fact we didn't," he told CNN. He added the information he received was based on an unsubstantiated source.

[Update 3:36 p.m. in Cairo, 8:36 a.m. ET] Opposition demonstrators formed a human chain to block  Egyptian army tanks from entering the anti-government redoubt in Cairo's Tahrir Square, CNN's Ivan Watson reported. This is the first sign of tension between the demonstrators and the Egyptian military since the protests erupted, but the standoff lasted just a short time, CNN's Arwa Damon reported.

[Update 2:49 p.m. in Cairo, 7:49 a.m. ET] Amid widespread criticism of Egypt for attacks on journalists, the country's prime minister on Saturday said there have been "no instructions to hinder the coverage of the media in the Tahrir area." "I made clear that they have full freedom to do anything they want," Ahmed Shafiq said.

[Update 2:26 p.m. in Cairo, 7:26 a.m. ET] Egypt's El Arish natural gas pipeline to Jordan has been closed after an attack set it on fire, the head of Jordan's national electricity company told CNN on Saturday. Ghaleb Al Maabreh said repairs will take at least a week, and will be paid for by Jordan.

[Update 2 p.m. in Cairo, 7 a.m. ET] An assassination attempt was made on Egyptian Vice President Omar Suleiman, the host of the Munich Security Conference said Saturday. During a plenary session at the conference, the host Ambassador Wolfgang Ischinger said several people were killed in the attack.

Details about the incident, including when and where it happened, were not immediately known but U.S. Secretary of State Hillary Clinton said at the conference that the news of the assassination attempt reflects the challenges of restoring stability in Egypt. The vice president, appointed last week amid widespread cries for President Hosni Mubarak's ouster, has been working to initiate a government transition, and Clinton said it's important to support the Suleiman-led process.

[Update 10:20 a.m. in Cairo, 3:20 a.m. ET] An Egyptian state-run news agency reported a gas pipeline has been set on fire in a suspected terrorist attack in Al-Arish.

A crowd of protesters gathered in Cairo's Tahrir Square remained relatively peaceful mid-morning Saturday after occasional street battles broke out in the city overnight. The scene appeared calmer than in recent days, and traffic appeared to come back to life in Cairo.

Five human rights activists, including two from Amnesty International and one from Human Rights Watch, were released Friday by Egyptian military police, the two groups said in statements. They were among numerous people - including international reporters and Egyptian lawyers and activists - detained on Thursday in Cairo. Some of those detained remain in custody, according to the two groups' statements.

The U.S. Embassy in Egypt and the U.S. State Department issued a statement Friday indicating that several embassy vehicles were stolen in Cairo on January 28. The statement was in response to an online video that showed a white diplomatic van running into anti-government protesters near Tahrir Square. The joint statement said, "We have heard reports of their (stolen U.S. vehicles) use in violent and criminal acts."

A security force accompanied by a "gang of thugs" stormed the office of the Muslim Brotherhood's news website Friday and arrested the journalists, technicians and administrators present there, the group said on its website. Witnesses later saw those arrested taken to the Interior Ministry, the group said.