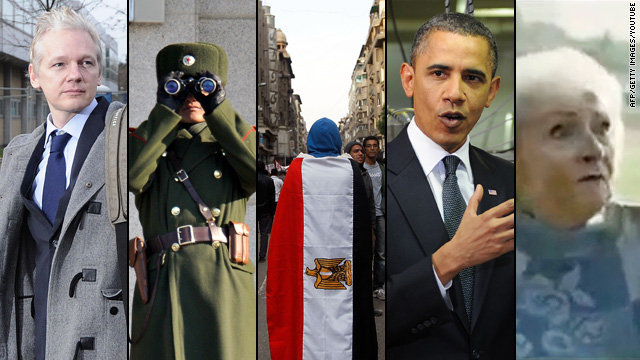 Protests against Egypt's government in Cairo's Tahrir Square are entering their 14th day Monday. Although many demonstrators still are calling for President Hosni Mubarak's immediate ouster, Mubarak has indicated he intends to stay in office through September's elections, with his vice president reportedly negotiating with opposition groups on a long-term path toward a representative government. After bloody clashes between anti-government and pro-government crowds last week, it's unclear when or how the uprising will be resolved. With the reopening of some banks and otherÂ institutions this week, willÂ life in parts of Cairo shift to something resembling normalcy? Here's a look at this and some of the other stories we plan to follow this week:

Some signs of a slow return to normalcy could be seen Sunday in parts of Cairo, with shops reopening, traffic increasing and some banks opening for the first time since January 27. The nation's central bank, however, has restricted the amount of money that individuals can withdraw. The Egyptian stock market also could reopen this week, following days of closure because of the uprising.Â Â Work has also begun on restoring Egyptian artifacts damaged during the protests.

We'll alsoÂ keep an eye this week on negotiations between Mubarak's regime and opposition groups. On Sunday, Vice President Omar Suleiman offered concessions, including the future end to the military emergency law that has been in place since Mubarak came to power in 1981, according to state-run TV. The two sides discussed, according to state-run TV, plans to form committees that would oversee changes aimed at creating a representative government.

For more on the unrest in Egypt, check out this breakdown of Mubarak's moves during the crisis andÂ this timeline of the Egyptian protests.

WikiLeaks founder Julian Assange is due to appear in a London court on Monday for the start ofÂ whatÂ is expected to be aÂ two-day extradition hearing. Assange, a 39-year-old Australian, is wanted in Sweden for questioning about allegations that he sexually assaulted two women in Stockholm last summer. Assange has denied the allegations and is fighting extradition.

Colombian rebels say they will release on Wednesday the first of five Colombian hostagesÂ they plan to free. The Revolutionary Armed Forces of Colombia, or FARC, has said it will release Marcos Vaquero, a mayor in Colombia, to the Red Cross. In December, the rebels announced plans to release the five hostages - a police major, two military service members and two municipal politicians - as a humanitarian gesture.

U.S. President Barack Obama on Monday is scheduled to speak in front ofÂ the U.S. Chamber of Commerce, which opposed his push for Wall Street and health care reforms and, in November's midterm elections, worked to defeat many Democrats who had backed his programs. The visit to theÂ chamber is seen as part of Obama's efforts to build bridges with the business community.

Retrial for Dutch politician accused of inciting hatred against Muslims

A retrial of a right-wing Dutch politician accused of inciting hatred against Muslims is set to begin in Amsterdam onÂ Monday. Geert Wilders is on trialÂ in large part because ofÂ a controversial film he made about Islam. The film, "Fitna," which he released online in March 2008, features images of terrorist acts superimposed over verses from the Quran in an apparent attempt to paint Islam as a threat to Western society. CommentsÂ he Â made in a variety of media between 2006 and 2008 also form part of the case against him. Wilders has said he has done nothing wrong. His first trial was halted when three judges were dismissed for possible bias.

Which Super Bowl commercials did well?

Super Bowl ads are an event to themselves. Check with CNN.com for a recap of the ads and a look at what viewers and critics thought of them. Also, check out Entertainment Weekly's choices forÂ best all-time Super Bowl ads and CNNMoney.com's sneak peak of this year's ads.

Members of the select committee tasked with examining the US Capitol riot met behind closed doors with their staffâ€twitter.com/i/web/status/1â€¦Gq
cnni

3:53 pm ET September 22, 2021 RETWEET
The Biden administration is ramping up deportation flights of migrants to as many as seven a day and talking to Braâ€twitter.com/i/web/status/1â€¦nU
cnni

3:10 pm ET September 22, 2021 RETWEET
Boeing is being called out by Ryanair, one of its major customers, for not selling its jets more cheaply. cnn.it/3nVHlYT
cnni

2:56 pm ET September 22, 2021 RETWEET
More than 50 airlines, oil companies and other companies, including Delta, BP and Boeing, have pledged to replace 1â€twitter.com/i/web/status/1â€¦3X
cnni