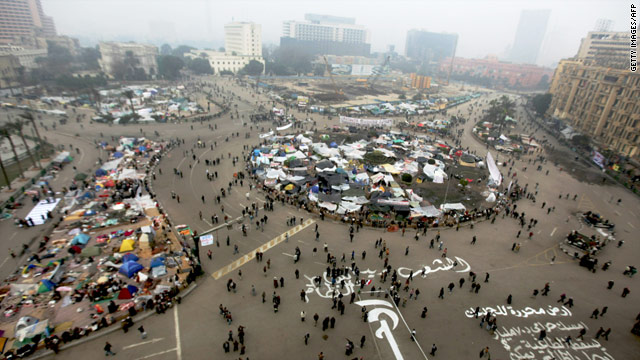 Demostrators gather Monday in Cairo's Tahrir Square, which has been the center of protests against President Hosni Mubarak.
February 7th, 2011
12:23 PM ET

[Update 7:20 p.m. Cairo, 12:20 p.m. ET] Egypt's Muslim Brotherhood needs to be treated with caution, former British Prime Minister Tony Blair warned Monday. "It's not an extremist group in a way that we have seen in other countries; on the other hand we shouldn't be complacent about it either," he said.

- CNN's Ivan Watson talks with men at the barricades in Tahrir Square.

- Tahrir Square, the epicenter of the anti-Mubarak protest, remains peaceful and festive. Morale "is very high," CNN's Frederik Pleitgen said. He reports that workers who rent camels to tourists are suffering financially as protests continue.

[Update 1:34 p.m. in Cairo, 6:34 am. ET] A group of protesters maintained a human chain at  Cairo's Tahrir Square on Monday morning.

- The Egyptian finance minister says the country will auction as much as 15 billion Egyptian pounds (about $2.5 billion) in treasury bills.

[Update 1:48 a.m. Cairo, 6:48 p.m. ET] President Barack Obama downplays the prospect of the Muslim Brotherhood, which has voiced opposition to the United States, ascending to power in Egypt once President Hosni Mubarak leaves office.  "They don't have majority support in Egypt, but they are well-organized," Obama tells Fox News' Bill O'Reilly on Sunday.

[Update 1:25 a.m. Cairo, 6:25 p.m. ET] Former ABC News journalist Sam Donaldson on Sunday stood by recent compliments he gave to Al-Jazeera regarding its coverage of the Egypt protests, telling CNN's Howard Kurtz that the network did "a service in fanning the flames in Egypt."

[Update 8 p.m. Cairo, 1 p.m. ET] Multiple bursts of automatic gunfire - apparently warning shots - could be heard in Tahrir Square near the Egyptian Museum. The incident marked an escalation of tempers between the military and protesters. After the army fired the warning shots, hundreds of protesters surrounded the military positions in the square, CNN's Ivan Watson reported.

[Update 6:58 p.m. Cairo, 11:58 a.m. ET] Shafiq, the prime minister, said authorities have been told "not to bother" human rights activists and journalists working at anti-government protests. If there have been such problems, they are "not intended," Shafiq told CNN's Candy Crowley on Sunday. Arrests of journalists and human rights activists "are not allowed at all," he said.

[Update 5:40 p.m. Cairo, 10:37 a.m. ET] Former Secretary of State Madeleine Albright said the United States cannot "micromanage the process" in Egypt, but that the Obama administration needs to make its goals clear. "Arriving at a democratic solution is important, which is in fact inclusive, democratic, peaceful and rapid," Albright said Sunday on CNN's "State of the Union."

[Update 5:10 p.m. Cairo, 10:07 a.m. ET] Egyptian opposition leader Mohamed ElBaradei said that the situation in Egypt remains in a standoff as long as Mubarak refuses to leave. "I hope somebody will send a message, I don't know in which way, to President Mubarak that for the sake of the country, for his own dignity, to defuse this crisis, he better step down," ElBaradei told CNN's "Fareed Zakaria GPS." Watch Zakaria's take on whether Egypt is a revolution or a revolt.

"Everybody is ready to give him the dignified out he is entitled to as a former president of Egypt," ElBaradei told Zakaria.

- During his CNN interview Sunday, ElBaradei also said he would refuse to meet with the Egyptan government unless Mubarak steps down. Other oppositions groups, including the Muslim Brotherhood, have meet with the government. ElBaradei said the Egyptian people are getting confusing messages about whether Mubarak should leave office, referring to a U.S. envoy's comments that Mubarak must stay in place during a transition of power and the Obama administration saying he should leave soon.

[Update 3:09 p.m. Cairo, 8:09 a.m. ET] The mood in Tahrir Square, the site of pro-Mubarak and anti-Mubarak clashes last week, was festive and peaceful as Christians and Muslims held hands and sang. The gathering appears to be strong as people continue to push for Mubarak to leave office.

[Update 11:46 a.m. Cairo, 4:46 a.m. ET] It is a "huge mistake" for Egypt to shut down the internet or use violence against protesters, British Foreign Secretary William Hague said Sunday.

Some banks in Egypt were open Sunday, according to the country's minister of finance. Some banks opened as early as 8:30 a.m. local time.  Banks have been closed in recent days amid anti-government protests.

[Update 10 a.m. in Cairo, 3 a.m. ET] Egyptian Coptic Christians are expected to gather at Tahrir Square to pray for those who have lost their lives since the protests started. Muslim protesters said they will form a ring around the Christians to protect them during the service.

The Muslim Brotherhood said it will meet with the country's vice president, days after the group said it would not negotiate until Mubarak leaves office.

Opposition activists formed a human chain outside one of the entrances to Tahrir Square on Saturday to prevent two Egyptian military tanks from crossing through barricades into what has effectively become an anti-Mubarak enclave.

The death toll from the violent clashes in Tahrir Square has reached 11, Egypt's Health Ministry has said. Nearly 1,000 people have been injured in clashes in the Cairo square.

The U.S. Embassy in Egypt issued a statement indicating several embassy vehicles were stolen in Cairo on January 28. The statement was in response to an online video that showed a white diplomatic van running into anti-government protesters near Tahrir Square.