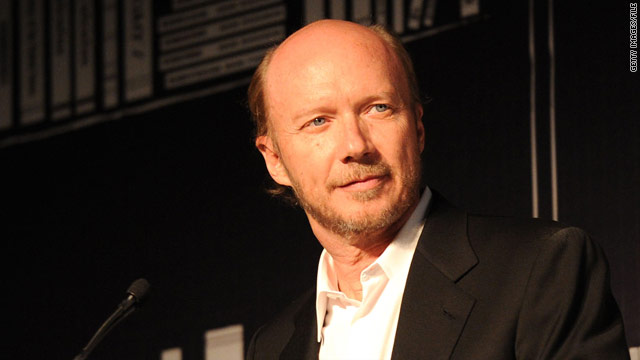 Writer-director Paul Haggis is dishing the goods on Scientology in The New Yorker magazine.
February 7th, 2011
11:45 AM ET

The award-winning writer-director of “Crash” has given The New Yorker an interview detailing the inner workings of Scientology. A member for 35 years, Haggis broke with the church in 2009 after it refused to condemn Proposition 8, which made marriage an institution between only man and woman in California.

In his letter of resignation to spokesman Tommy Davis, Haggis wrote that he could not align himself with an organization that would back "that hate-filled legislation." He concluded, “Silence is consent, Tommy. I refuse to consent.”

The Google executive in Egypt is expected to be released Monday afternoon after becoming an opposition spokesman against Egyptian President Hosni Mubarak. In a phone interview with CNN, Hazzem Ghonim said that he last spoke to his brother January 28.

Wael Ghonim has long used his Twitter page to voice his opposition. On January 27, he wrote: “Pray for #Egypt. Very worried as it seems that government is planning a war crime tomorrow against people. We are all ready to die."

The owner of the Dallas Cowboys set out to break an attendance record with Sunday’s Super Bowl. Unsuitable temporary seating quashed that, and some 400 ticket holders denied seats are expected to get a refund of triple the cost of the face value - $800 - of their ticket.

They were allowed in the stadium to watch the game on monitors or from standing platforms in each corner of the stadium, the NFL said.

"It was terribly mismanaged, and we're just beside ourselves," said an unnamed Pittsburgh Steelers fan between tears.

The NFL promised to look into the matter: "We regret the situation and inconvenience it may have caused."