A man who was shot during protests last year in Kenosha, Wisconsin, is suing the city, the county and many of its o‚Ätwitter.com/i/web/status/1‚Ä¶uN

Alex Murdaugh waived an extradition hearing in Florida and is expected to return to South Carolina to face charges‚Ätwitter.com/i/web/status/1‚Ä¶C5 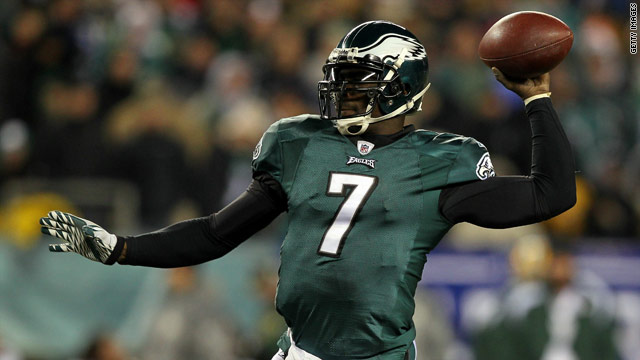 Dallas official under fire for giving Vick key to city

A Dallas City Council member is taking heat from animal rights activists and fellow elected officials for giving NFL quarterback Michael Vick - convicted in 2007 of charges relating to dogfighting - a ceremonial key to the city over the weekend.

Councilman Dwaine Caraway, who also is the city‚Äôs mayor pro tem, presented the key to Vick after the Philadelphia Eagles star spoke an event geared toward teenagers at Dallas' Cirque club on Saturday.

"I would like to personally present to Michael Vick the key to the city of Dallas, Texas. Michael ‚Ä¶ You deserve it. You earned it. We appreciate you, and we love you," Caraway told Vick - who plays for one of the Dallas Cowboys' division rivals - during the presentation, which was posted on YouTube.

Animal groups responded to the gift harshly in the city's news media.

"Michael Vick is a convicted felon. He committed horrible, atrocious crimes, violent crimes," Jonnie England, of the Metroplex Animal Coalition, told CNN affiliate WFAA. "He has done nothing to deserve a key to the city of Dallas."

On Monday, Dallas Mayor Tom Leppert distanced himself from the presentation, telling the Dallas Morning News: "We don't condone it and clearly didn‚Äôt approve it. It's unfortunate, and I would rather have not seen the situation."

Two council members told the newspaper that the presentation was inappropriate, though one defended it, saying Vick "served his time" and "did what the court told him to."

The newspaper reported that council members are allowed to hand out token keys¬Ý- a $25 key with Dallas' seal - to whomever they want, in contrast with the more official gold or crystal city keys that the mayor generally reserves for foreign-elected officials.

According to the Morning News, Caraway on Tuesday told Dallas sports radio station 1310 AM that he honored Vick because he thinks the quarterback can be a role model for kids.

"These kids are the future, and we don‚Äôt have enough folks out here joining hands and turning lives around," Caraway said, according to the newspaper.

Since his release from prison in 2009, Vick has voluntarily spoken to kids about how dogfighting is wrong, among other things. An online promotion for Saturday‚Äôs event, billed as "providing an alcohol-free environment filled with positive role models and messages for teens aged 14-17," said Vick‚Äôs "inspiring message about overcoming life's challenges has reached teenagers all over the country."

The NFL indefinitely suspended Vick in August 2007 after he pleaded guilty to a federal charge of bankrolling a dogfighting operation in Virginia. Vick left a Kansas prison in May 2009 to serve the last two months of his 23-month sentence in home confinement. He is to serve three years of probation.

He joined the Eagles as a backup in 2009, and he took over the starting role early in the 2010 season. He was named the Associated Press Comeback Player of the Year for 2010.

9:58 pm ET October 15, 2021 RETWEET
When crude oil leaked into the Pacific Ocean off the coast of Southern California earlier this month, the amount sp‚Ätwitter.com/i/web/status/1‚Ä¶uE
cnni

9:56 pm ET October 15, 2021 RETWEET
Masks and outdoor gatherings will still be the best way to make holiday gatherings safe this year, the US Centers f‚Ätwitter.com/i/web/status/1‚Ä¶7X
cnni

9:42 pm ET October 15, 2021 RETWEET
"To deal with the past you must face the truth." President Biden delivered sweeping remarks about human rights, ze‚Ätwitter.com/i/web/status/1‚Ä¶kU
cnni