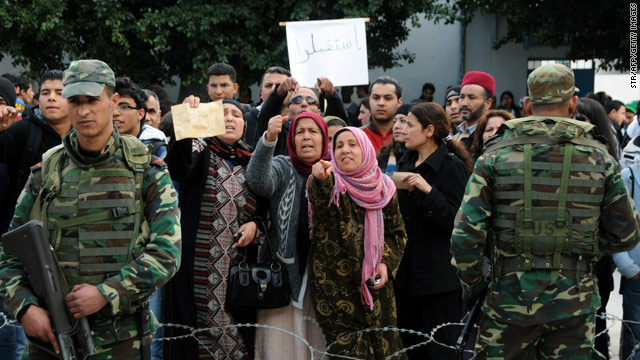 Demonstrators shout and wave signs in front of the Tunisian parliament on Monday in Tunis.
February 8th, 2011
04:42 PM ET

Tunisia now, and where it's going

A transitional government is overseeing sweeping changes in Tunisia after massive demonstrations forced out the country's longtime president and sparked similar protests across the Middle East.

Under president Zine El Abidine Ben Ali, the news media was tightly controlled. Internet activity was monitored and access to some sites was restricted. Police routinely stopped people without cause to check their identity and question them - it was a policy that the government said was needed to prevent terrorists from gaining a foothold in Tunisia. Tunisians limited what they spoke about with friends and neighbors for fear that someone might be a police informer.

Today, internet filters have disappeared and there is unfettered access to all websites. Journalists are learning how to create a free press as they transform their newspapers, radio broadcasts and television stations. People express their opinions openly in the streets. Reforms are taking place in every region of the country, which is home to about 12 million people.

The question is, will these changes last?

"People want to go back to normality. They want things to be sorted out," said Francesca Russo, who moved from Italy to Tunisia with her husband a few years ago for work.

But she said there is still uncertainty in the air. Rumors of kidnappings are abundant, although many have been debunked on social media websites. Small incidents continue to disrupt daily activity in Tunisia. These incidents are widely believed to be perpetrated by people who once worked for Ben Ali's secret police and are aiming to destabilize the transitional government.

Still, the sentiment among the people who fought for change in Tunisia is that there is no turning back.

"People are moving in the right direction and Iâ€™m really impressed," Russo said. "Nobody wants to go back. Everybody is saying it will take time, it will be difficult, but we can do it."

Animals are getting larger beaks, legs and ears that allow them to better regulate their body temperatures as the pâ€twitter.com/i/web/status/1â€¦xE
cnni

4:53 am ET September 19, 2021 RETWEET
A "megapod" of about 100 humpback whales was recently filmed skirting a boat off the coast of Australiaâ€twitter.com/i/web/status/1â€¦4U
cnni