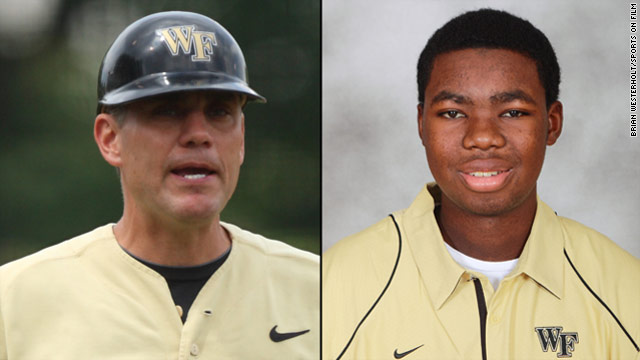 A college baseball coach has donated a kidney to one of his players.

"Coach Walter told the team about a week ago what he wanted to do and, well, there were just a bunch of stunned faces in the room," Wright said. "But the coach didn't really seemed fazed by the surgery. I don't think it was a matter of making the decision so much as it was, 'This is how it has to be, so it is.' "

Walter reportedly stepped up after learning that none of the athlete's relatives were a match.

The coach talked to USA Today before the operation. "When we recruit our guys, we talk about family and making sacrifices for one another," he said. "It is something we take very seriously. I had the support of my family, Wake Forest and my team. To me it was a no-brainer."

Donating a kidney is an incredible act of generosity, but there's something uniquely remarkable about this case. The freshman from Columbus, Georgia, hasn't even played a game with Wake Forest yet.

Jordan, who was the New York Yankees pick in the 19th round of 2010's amateur draft, had only practiced with his teammates last fall at Wake Forest. He started school at Wake Forest last August, and endured hours of dialysis a day while keeping up with the demands of college ball and his school work. In recent months, his health began to deteriorate, Wright said.

Next semester, Jordan will take time off at home to recover from the surgery. But the coach has said he plans to be at Wake Forest's first game against LSU in less than two weeks.

"He might not be catching fly balls," said Wright. "But Coach Walter will be with his team."

5:01 pm ET June 13, 2021 RETWEET
This retired teacher found her passion while birding. Now she wants to make it more accessible to all.â€twitter.com/i/web/status/1â€¦sd
cnni

4:01 pm ET June 13, 2021 RETWEET
Taiwan has experienced one of its worst droughts in decades, with authorities limiting water supply as some reservoâ€twitter.com/i/web/status/1â€¦Pm
cnni

2:03 pm ET June 13, 2021 RETWEET
If you're looking for one of the most efficient cardio workouts that anyone can do anytime, anywhere, you only needâ€twitter.com/i/web/status/1â€¦J8
cnni