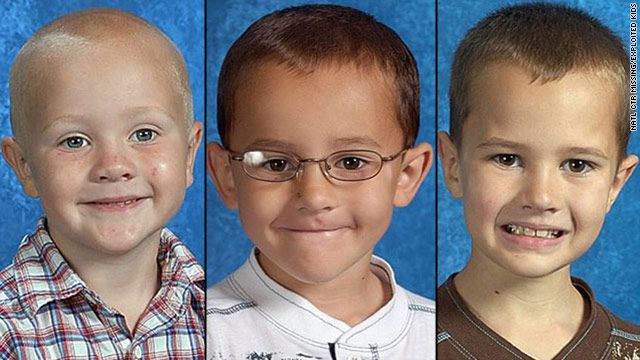 The Skelton brothers left their mother's home in Morenci, Michigan, on Thanksgiving Day for a custodial visit with their father and never returned.

Alexander, 7, Andrew, 9 and 5-year-old Tanner, are still missing, and police say the case has turned into a homicide investigation.

Their father, John Skelton, allegedly first told police he left the three boys with a woman, whom he identified as Joann Taylor, the morning before he tried to take his own life - in part to ensure that they did not witness his suicide attempt, police said. Skelton said Taylor was supposed to return the boys to their mother at their home in Morenci, a southern Michigan town of about 2,400 people about 40 miles west-northwest of Toledo, Ohio, on November 26, Weeks said. But the boys never arrived, and authorities said earlier they aren't certain she even exists.

John Skelton, now charged with 3 counts of parental kidnapping, says he would never hurt his children. His latest story is that he gave the boys to a group called United Foster Outreach and Underground Sanctuaries, but no such group was found to exist.